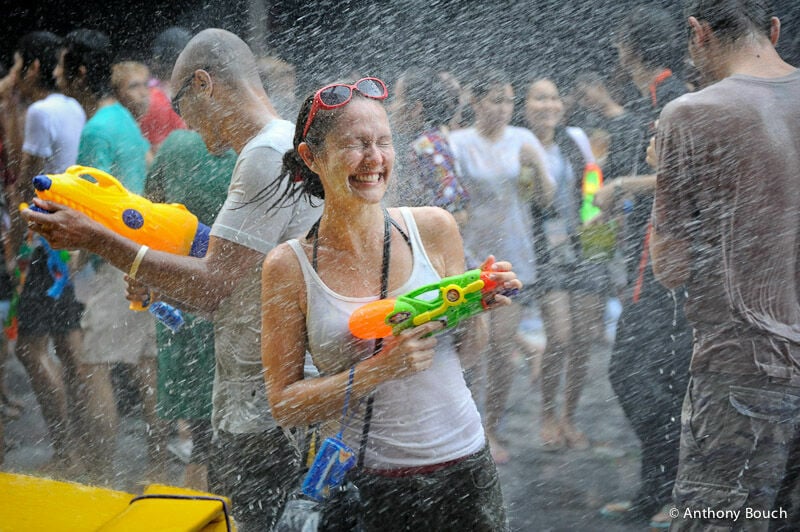 Fret not, splash happy expats. The tourism industry is fighting for your right to a Songkran water fight. Now the Bangkok Metropolitan Administration is mulling whether to allow Songkran water splashing festivities to be held on Khao San Road, after the CCSA’s unpopular announcement banning water splashing activities for a third consecutive year sparked much backlash from local businesses last week.

Earlier, the CCSA had agreed that water splashing would be allowed at organised events — as long as there is no alcohol and events are under “Covid Free Setting” measures. Water splashing is not allowed on public areas, like roads. The government is focusing on allowing water splashing and pouring as a blessing at traditional Songkran events rather than the massive water fights the Thai holiday is internationally known for.

On Thursday, business owners in Bangkok’s popular walking street teamed up with tourism professionals from Pattaya, Phuket and Chiang Mai to draft and submit a joint petition urging the CCSA to repent of its party foul, fearing a loss of income.

The group has proposed a list of measures for screening and limiting Songkran party participants, according to the president of the association of business operators on Khao San Road, Sa-nga Ruangwatthanakul.

“We will put in place measures to handle party-goers on the 400-metre stretch of Khao San Road. We want to explain to the government that the country is trying to welcome tourists back, particularly in the summer when the Songkran festival will be held.”

“But the famous water splashing is banned. With such a ban, how can we attract them to the country? We ask the government to allow the activity on April 12 to 15 to promote the festival.”

Bangkok’s communicable disease committee will meet on Monday to consider their request and will announce their decision on Tuesday, according to clerk Khachit Chatchawanit. He added that the committee will “consider what is best for Bangkok residents.”

According to the law, provincial communicable disease authorities may ask the CCSA’s operations centre to remove the unpopular Songkran restrictions, which will then pass them on to the CCSA, according to the director-general of the Department of Disease Control, Opas Karnkawinpong.

The current Songkran precautions outlined by the Public Health Ministry say that festivities can still be held, albeit without the classic chaos of water fights and powder smearing in public, as well as no alcohol sales, according to a spokesperson for the CCSA, Apisamai Srirangson.

“Songkran events can still be held as long as the right precautions are taken, and people can travel to other provinces to visit their relatives and take part in traditional activities there.”

The CCSA’s current restrictions also encourage festival observers to practice traditional activities without water, such as bowing to elders at a distance of at least 1 metre, instead of pouring water on their hands as a sign of respect and blessing.

The restrictions, though well-meaning, fail to take into account the elderly’s desire to be blessed and honoured by their younger relatives, while also reflecting logical fallacies about the spread of Covid-19 among family members.

Meanwhile, expats can hold their breath and hope to splash.

Marc26
30 minutes ago, ace035 said: Too many scare mongering mode in this forum regarding false positive upon Day 1 T&G. As of March 1 through March 23, 195,703 incoming tourists arrived in Thailand; 1276 tests positive for…

Thaidup
9 minutes ago, ace035 said: She's not interpreter and speaks the best English as a Thai national, And she aint bad lookin either🙂

ThailandRyan
9 hours ago, Thaidup said: Sponser is a better mixer than M150, bigger bottle and sweeter taste, so yo need less LOL.😀 You missed the point. The M-150 bottles are empty when filled with Lao Kao.....you can find them on…