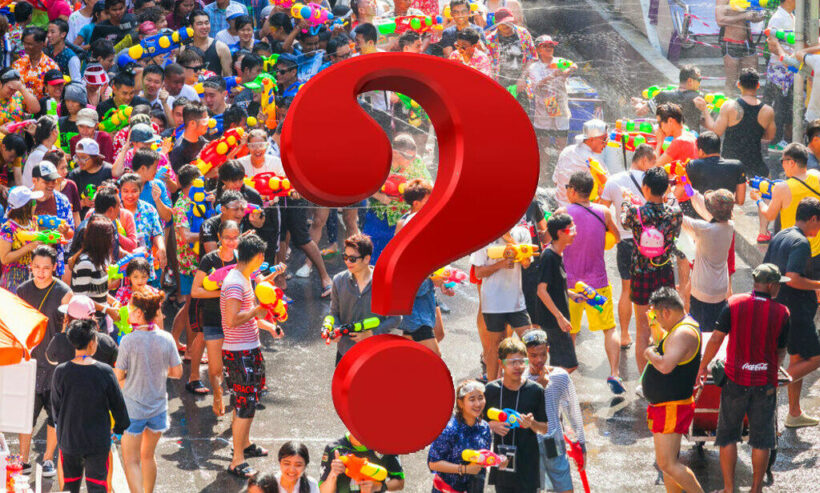 A Songkran with water MAY end up being a thing for 2022. This moist bombshell floating around the Thai media this afternoon. But you’ll need a face mask, an ATK tests and only at designated zones. The change of mind surprised everyone at this afternoon’s CCSA daily briefing.

According to a post on the Khaosod English Facebook page, it looks like the Thai government have had a quick rethink of their earlier announced Songkran policy for this year. Originally it was going to be a dry Songkran with no water splashing allowed, and only traditional events and activities to be conducted.

But now it appears that they will allow “some organisers” permission to run special Songkran water splashing events BUT you’ll need to wear a face-mask and have an ATK test before being allowed in the zone. Alcohol will also be banned from the area.

The Bangkok Metropolitan Authority has said they’ve already organised an event but that there won’t be any water throwing inside the zone (so what’s the point?!) and attendees will have to be triple vaccinated.

Dr. Taweesin Visanuyothin, spokesman for the CCSA, said today that organisers will have to seek permits from the government first . He also added that the organisers seeking permits must have their designated zone in “an open and spacious area” and limit the total numbers for the area.

It’s going to be another dry Songkran. For the third time, water fights have been banned for the Thai New Year due to the Covid-19 pandemic. The holiday, which is April 13 to 15 this year, is celebrated with massive water fights with crowds shooting water guns, spraying water hoses, and dumping buckets of water on each other. Everyone gets soaked… but not this year.

The water fights and foam parties, particularly in public areas, have been banned due to the ongoing Covid-19 outbreak. Thai officials say only traditional Songkran activities are allowed, which includes going to temples, praying, and pouring water on Buddhist statues as well as pouring water on each other and on the hands of elderly people as a blessing.

Those attending events during the holiday in closed spaces must wear masks and maintain a social distance. Drinking alcohol at those venues is not allowed.

There are no restrictions on interprovincial travel, so Thais can still visit their families to celebrate the New Year.

The decision to ban the water fights was made by the Centre for Covid-19 Situation Administration today during its general meeting chaired by PM Prayut Chan-o-cha. Under the guidelines set by the CCSA, traditional Songkran ceremonies at temples must abide by the government’s “Covid Free Setting” health measures. The public is asked to avoid celebrations in public places, like on the road. Other Songkran activities can be hosted with permission from the government.

The CCSA also announced that powder is also banned during Songkran, a rule that had been set before the pandemic. The white pasty powder is often rubbed on people’s cheeks and faces during the holiday, but the government decided to ban powder after sexual harassment reports of some people rubbing the powder on others on inappropriate areas and other reports of people aggressively smearing the powder.

Manu
Quote A Songkran with water MAY end up being a thing for 2022. This moist bombshell floating around the Thai media this afternoon. But you’ll need a face mask, an ATK tests and only at designated ‘age’ zones. The change…

steve860
4 minutes ago, Manu said: Not that it is the most important non-sense (again), but is it feasible at all? I mean, can you actually breath with a soaking wet mask on? Reminds me of the water board torture... When…

Pinetree
Thank goodness for that.

Pinetree
On 3/18/2022 at 11:11 PM, Noble_Design said: There's no restrictions on playing water in your own home compound with your own family members right? Or in the sea

Benroon
On 3/18/2022 at 3:04 PM, butterfly said: and you have to wonder why, all for what at the end? just demonstrate how incompetent, senseless and ridiculous our European leaders are 😁 They couldn't organize a pissup in an Irish bar, To…