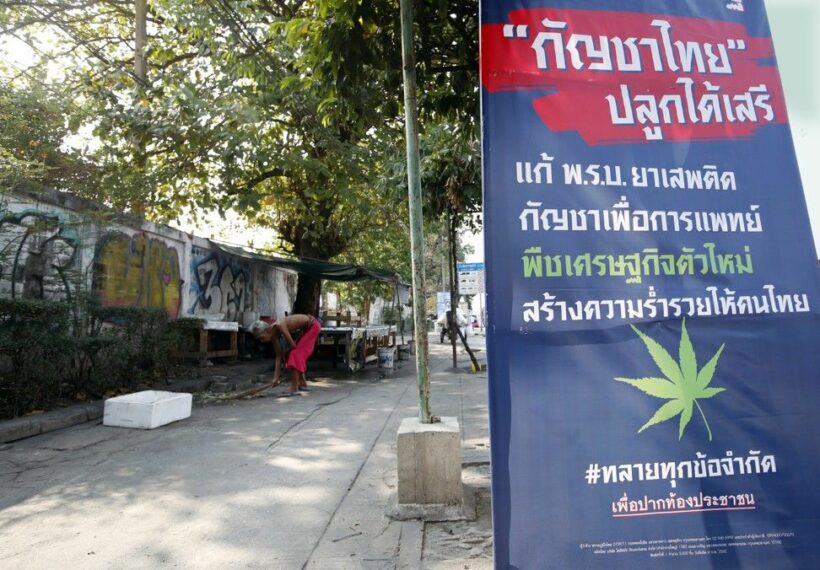 PHOTO: Campaign posters before the last election for the Bhumjaithai Party who continue to push further legalisation of cannabis

The Bhumjaithai Party, a party in Thailand’s coalition government, is now proposing a law that would allow Thais to grow a limited amount of cannabis at home. This takes laws, passed less than a year ago that legalised the drug for medicinal purposes and research, a step further towards general decriminalisation.

Under Thailand’s current drug laws, recreational users of cannabis can still incur tough penalties, including up to 10 years in prison for possession along with hefty fines.

Now Supachai Jaisamut, a lawmaker in the Bhumjaithai Party, the third-largest partner in the coalition, says their proposal would allow up to six marijuana plants per household.

Speaking to Reuters, he said the principle is for medical use, you can have it at home for ailments, but not smoke it on the street.

“It would also allow the sale of plants to licensed institutions under the supervision of an institute for that purpose.”

The proposed Plant-based Drug Institute would have authority to purchase, extract and export cannabidiol – the chemical derived from the cannabis plant – comparing it to the Californian model.

The proposal would deliver on an election promise of the Bhumjaithai Party, which campaigned on a policy to allow Thais to grow cannabis. Its supporters say the draft law is designed to develop the Thailand’s emerging legal medical marijuana industry.