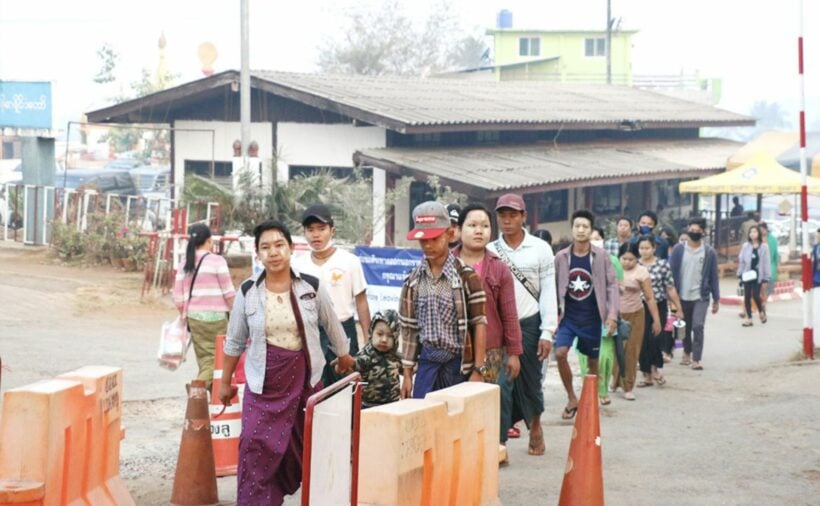 Despite Thailand closing its international borders back in April, in reality, some of the country’s land borders are almost impossible to seal and prevent the ‘leaks’ of locals crossing over. Thailand has land and river borders with Myanmar, Malaysia, Laos and Cambodia – all with official checkpoints but also hundreds of well-worn tracks as villages casually traverse the official borders.

Thai officials have downplayed the threat from Covid-19 through the leaky borders, whilst the neighbouring countries have had a low number of new infections. But now Myanmar has had a spike over the past week… 40-90 new cases per day. At this stage most of the cases have been in the Rhakine state, on the western side of Myanmar, not the Thai border side.

It should be stated that the risk of virus transmission is extremely low as these traditional villages have traded with one another for centuries and are unlikely to travel beyond their neighbouring villages. In many cases there simply isn’t any access to larger population centres.

But the Thai PM Prayut Chan-o-cha is ordering the closure of all access routes to Myanmar from Thailand’s western Kanchanaburi province after the wave of infections across the Burmese border.

Officially, businesses have been able to continue trade between the 2 countries, and import and export products as usual by specifying a delivery point at the border crossing without allowing Burmese operators to deliver goods into Thailand or visa versa.

The routes that are being officially closed include the Phu Nam Ron checkpoint in the southern section of Kanchanburi, Ban Khao, Bongdi checkpoint, Thayok district, Ban E Tong ‘natural channel’, Thong Pha Phum and the biggest, the Three Pagodas border checkpoint in Sangkhlaburi. A lot of the western Thai border with Myanmar is impassable mountainous tropical jungle and almost impossible to effectively control the passage of villagers.

But yesterday Thai army officials met with the officials from the main city district, Sai Yok and Sangkhlaburi districts, to discuss Covid-19 prevention measures in the vicinity of the Three Pagodas checkpoint. After a fresh outbreak in the Sittwe area, in Rakhine state, Myanmar has now found patients and

Suspected new cases have been discovered in the Burmese city of Mawlamyine, just 270 kilometres from the Three Pagodas pass. Officials from the army, police, immigration office, along with village chiefs are tightening the monitoring of natural channels from the Ban Nam Koek checkpoint to the Three Pagodas area, including nightly patrols. There are more than 20 natural channels used by villagers in both Thailand and Myanmar to cross borders around the area.

Thai army officials say a Covid-19 outbreak in the area would cause “enormous damage to the local economy” as Kanchanaburi province is a major tourist destination for Thais and foreign tourists.