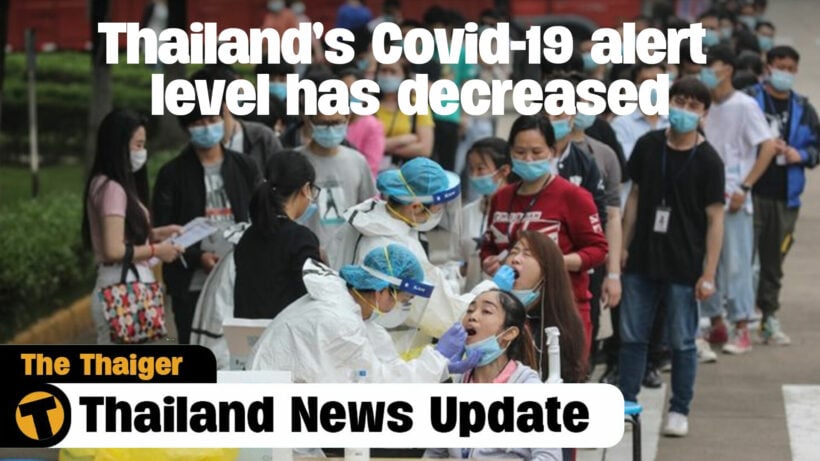 The Ministry of Public Health is bringing joy to everyone’s ears with their latest announcement that Thailand’s Covid-19 alert level has decreased from Level 4 to Level 3 nationwide. Whether Thailand is ready to declare Covid-19 as endemic will depend on vaccination rates, according to the ministry.

Director-General of the Disease Control Department Opas Kankawinpong said Level 3 means Thai residents still can’t go to bars and entertainment venues, or any places which are crowded or have bad ventilation systems.

Opas said more than 90% of coronavirus deaths are among elderly people.
Thailand is coming out of the pandemic and edging closer towards declaring Covid-19 as endemic, with 54 provinces in an “improved” situation and 23 provinces in a “stable” situation.

Director-General of the Department of Medical Sciences Supakit Sirilak said no hybrid strains of coronavirus had been confirmed in Thailand yet, but authorities would closely keep an eye out for them. .***

The Royal Thai Army is boycotting Lazada in the latest reaction following an advertisement deemed offensive to Thailand’s monarchy, which disappeared from TikTok shortly after it was uploaded last week.

Thailand’s Army Chief has banned e-commerce giant Lazada from delivering packages to army premises but says that soldiers still have the freedom to buy products from Lazada if they so wish, so long as they pick up their packages outside army premises.

Last week, Lazada and two influencers were thrown into the fire for an advertising campaign deemed offensive to disabled people. Royalists said the video mocked a member of the royal family, HRH Princess Chulabhorn, who has Lupus and uses a wheelchair.

The video was deleted, and Lazada and the advertising agency apologised, but the issue failed to disappear with the hashtag #BanLazada trending on Thai twitter for many days. Customers posted videos of themselves deleting the application from their phones, and various merchants and companies temporarily closed down their online shops on Lazada.

Narongphan said that soldiers could still choose to use Lazada if they so wished, but they would have to pick up the parcels themselves at a destination outside military grounds.

Meanwhile, Thailand’s Ministry of Digital Economy and Society will file a complaint with the Technology Crime Suppression Division against all parties responsible for the offensive advert.

Both the creators of the ad and the actors, have insisted they intended no offence and certainly did not have any members of the Thai royal family in mind, given that there are thousands of physically challenged people living in Thailand that use a wheelchair.**

Thailand is expected to be exporting durians for the value of 120 billion baht to China this year, ——about a 10% increase, according to Minister of Agriculture and Cooperatives Chalermchai Sri-on.
The Chinese government has set strict controls against fruit imports during their Covid-19 pandemic response. Thailand exported 875,100 tonnes of durian to China last year, valued at 109 billion baht.

Thailand’s durian has the largest market share in China, at around 40%. Durian from Chile came in second at 15% and Vietnamese durian at 6%. But the Thai durian is prized amongst Durian aficionados.
In China, the price of Thai durian has risen to 120-150 baht per kilogram, while other Thai fruits are also being shipped in larger quantities.
With increasing fuel prices, partly caused by the war between Russia and Ukraine, global inflation, and fuel shortages, the Thai government wants the private sector to help boost durian shipments via shipping and railway.
To support farmers, the Thai government’s Fruit Board will continue to promote durian exports.***

Prime Minister Prayut Chan-o-cha is ordering the National Office of Buddhism to discipline and be stricter with Thailand’s Buddhist monks, following a long string of cases of monks breaking rules.

Ordained monks are expected to follow 227 rules outlined in the code of monastic discipline. However, in recent days, we have been seeing younger monks breaking serious orders such as the no sex and no drugs rules.

Government spokesperson Thanakorn Wangboonkongchana said PM Prayut had expressed his concerns about undisciplined monks who crucially affect the faith of Thai Buddhists. So, he ordered the National Office of Buddhism and Provincial Office of Buddhism, or POC, to ramp up their efforts to observe monks and ensure they are strictly adhering to their monastic code of conduct…

Police are investigating the murder case of a 74 year old Norwegian man in Pattaya yesterday.

The man has been found dead in his Pattaya home’s toilet over the weekend. Police say they were horrified at the scene of the man’s death on Saturday evening. The man had cuts on his wrists, a slit throat, and he was hanging on a rope that was connected to the ceiling with a pool of blood beneath. The man’s home was in the Bang Lamung district ,east of Pattaya.

In front of the toilet there was a handwritten note on the wall in red reading… “Ben killed me. I will be one ghost in the house 100%” Another note was found by his body, also in red, saying the same thing found on the wall but with an additional sentence “Give this to Ben”.

A 43 caretaker said she had been trying to contact the man for several days but was unable to reach him, so decided to pay a visit. Nobody answered the door when she knocked, but when she entered the house she saw his lifeless body hanging in the toilet. She then contacted police who arrived around 11:30 at night. He had mentioned chronic diseases to the caretaker in the past, without being specific.

Police are treating the case as a suicide at this time. His body was taken to hospital for an autopsy.***

rc1
Time to drop the restrictions, temperature checking, mass masking etc. The world is moving on, time for Thailand to be the land of smiles again.
Manu
Quote Director-General of the Disease Control Department Opas Kankawinpong said Level 3 means Thai residents still can’t go to bars and entertainment venues, or any places which are crowded or have bad ventilation systems. In which world are these people…
Naanlaew
Malarkey. Do as you please, but you should not be offering medical advice to anyone.
HiuMak
Numbers must coincide with opening. analog
I agree with rc1 and manu. Time to get rid of everything. Vaccine requirements, ridiculous masking everywhere, stupid caution tape crosses on the floors of lifts, fear everywhere. The pandemic is over, the only people dying from covid are the…