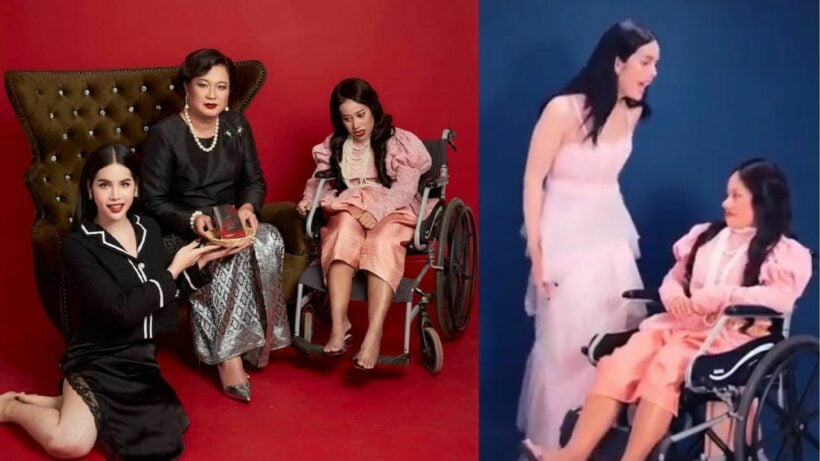 Royalist groups in Thailand are in uproar, real or feigned, after a Lazada (online shopping platform) posted photos they claim mocked members of the Thai royal family and physically disabled people in a social media campaign.

The group of Royalists fronted up to the Lazada office in Sukhumvit Road, Bangkok yesterday demanding answers over, what they perceive, as a controversial video clip on TikTok. The Royalists deemed the post as offensive to the Thai monarchy and that the post “bullied the disabled”.

The mob was seeking an explanation over the controversial clip, and what they believe were depictions of a royal family member, and how they were allowed to be published.

The video promotes a Lazada clothes sales campaign and shows two online influencers, Nara Aniwat and Thidaporn “Nurat” Chaokuwiang. Thidaporn is seen dressed in a traditional Thai costume, seated in a wheelchair. Nara is accusing Thidaporn, playing the role of her mother from a privileged background, of stealing her clothes.

A member of the Thai Royal Family uses a wheelchair. So Thai royalists groups took the quantum leap of assuming that this (perhaps tasteless) piece of marketing frippery was an outright insult to the Monarchy.

In response to the campaign, Nara said there was never any suggestion as to who the actors should should look like, noting that “there are thousands of people in wheelchairs, or wearing traditional Thai costumes”. Nara claimed that some people were stirring up trouble trying to link the person sitting in the wheel chair to a “certain individual” (Princess Chulabhorn, sister of HM King Vajiralongkorn, has Lupus, an auto-immune disease, and uses a wheelchair)

Intersect Design Factory, the ad agency who contracted the ad and influencers, apologised on Thursday night. They also threw their influencer partner under the bus by disassociating themselves from the ad.

“As an influencer contact coordinator and promoter of the Lazada 5.5 campaign, we are not affiliated with any of the images that are still circulating online…. As for the clips that spread throughout social media, we sincerely apologise for the incident and welcome all feedback for further improvements to our work.”

The royalists’ demands to submit a letter in person to senior Lazada management didn’t go as planned. Instead a member of staff was sent downstairs to accept the letter. But the protesters felt slighted by the appearance of the lowly staff member and, after berating the Lazada employee, tore up their letter. Their parting words were that they were going to declare ‘war on Lazada’.

The letter, later released to Thai media, said that… “Thai people could not accept the clip” and claimed that the TikTok clip… “has a hidden agenda to mock the monarchy and disabled people”.

Political activist Srisuwan Janya, Thailand’s ‘complainer in chief’, issued his own warnings that “he may file complaint with the police” against Lazada for alleged lèse majesté and violations of Thailand’s Computer Crime Act for allegedly mocking the royal family.

Despite hasty apologies all around, from Lazada management and the social media influencer who created the posts, the outrage continued overnight with netizens sharing their thoughts on the matter. The clip has been removed.

The #BanLazada hashtag has now attracted over 100,000 tweets, there are similar hashtags also trending in response to the clip. People have even posted clips of them deleting the Lazada app in protest of the campaign.

“This is beyond the word unacceptable. What kind of seeds do you want to grow in our society? #LazadaTH can you actually handle the consequences? The consequences do not concern only you being banned but damage done to how our children will grow”.

“Frankly, it’s wrong to mock people with disabilities just like mocking someone for their gender, skin color, etc. How pathetic they make themselves look by doing it. To me, it is deeply offensive and I don’t accept any shit from this kind of bully.”

Politicians are also weighing into the fray, former Democrat party member Payu Nerngchamnong said the post was “cruel and unacceptable”… “regardless of whether or not the targeted person is a member of the Royal Family”.

“It’s tasteless, and instantly recognisable to the Thai general public of who they’re trying to mock… there is no place for this kind of behaviour.”

Cabra
Seems like much ado about nothing, really. Seems the only ones butt hurt are Thai royalist.
MikeW
So someone dresses up in a traditional Thai suit sits in a wheelchair and the elite get butthurt
Morpheus
Thats not the only problem Lazada has, Lazada has grown so quick and large its internal systems are failing to keep control of sellers and buyers. I have been a regular customer for 5 years now. I am starting to…
Scribble
Not bothered about the story. But every time I see something on Lazada, I go to Shopee and buy it much cheaper.
ShibaBud
Not seen the ad, I can only tiptoe into this topic. But I don't get the Elitist logic. There are so many ways to interpret the picture. Looks to me like a far stretch. But it highlights the ultra sensitivity…