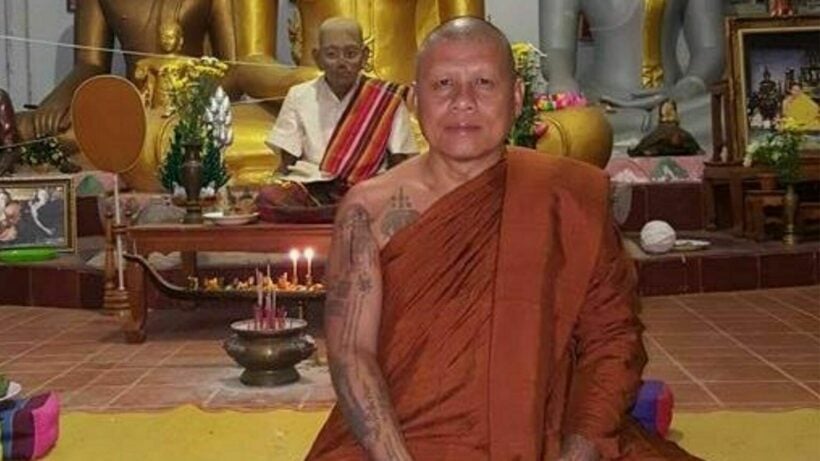 A famous Thailand monk, known for his predictions and visions, was reportedly caught drink driving with methamphetamine pills hidden inside his robes after a 20-kilometre police chase yesterday in eastern province Mukdahan, which borders Laos.

Police followed a pickup truck after it ran a red light in Mukdahan city. Turns out a famous monk was behind the wheel. Officers chased the bronze Toyota Vigo from Mukdahan city to Ban Kham Ahuan subdistrict in Mukdahan over 20 kilometres away.

Officers breathalysed the monk and say he had a high blood alcohol level. Police searched the monk and say they found 37 methamphetamine pills, known as ya ba, hidden in his robes. Drug paraphernalia hidden in a candy box was also found inside the car, police say. The monk was allowed to lie down to sober up before he was taken to the district’s dean of monks to be defrocked and then to the police station for legal proceedings.

The monk, Luang Pu Tuanchai, is famous for his predictions in the widely covered and often sensationalised Nong Chompoo case where a 3 year old girl was assaulted and killed in Mukdahan. The child’s uncle has since confessed to the murder after becoming somewhat a celebrity by the constant media attention.

Luang Pu Tuanchai made headlines after claiming he had a vision in which he saw the man who murdered Nong Chompoo. After that, many people thought the monk could accurately predict lottery numbers. However, the Buddhist sangha said the monk displayed inappropriate behaviour in relation to the Nong Chompoo case and expelled him from Mukdahan province last year. The monk disobeyed and made his way back to the province.

Stardust
2 minutes ago, TheDirtyDurian said: The Devil's Trumpet... Much better. You don't even know you're trippin' You mean good for the predictions of lotto numbers ? 🤣
HolyCowCm
3 hours ago, Transam said: If I was on the gear he was on, I would probably come up with some visions and predictions too.....😜......🤭 You would have been walking on water or flying like you had a jet pack…
Convert54
It is easy to be scathing about the disingenous behaviour of so called devotees of Buddhist doctrine but in the reality of the world I have lived in there is not much justification left for any religious mafia of any…
HolyCowCm
Is this article accurate? As far as I understand the Fathead bigmouth grotesque uncle of Chompoo did not and has not admitted to murdering the girl. Just the opposite. This monk was definitely flying in some sort of orbit. He…
HolyCowCm
Would be hilarious if he said the yah bah pills he mainly only threw to the ground (same as tossing bones) as he could predict the future for how they fell.