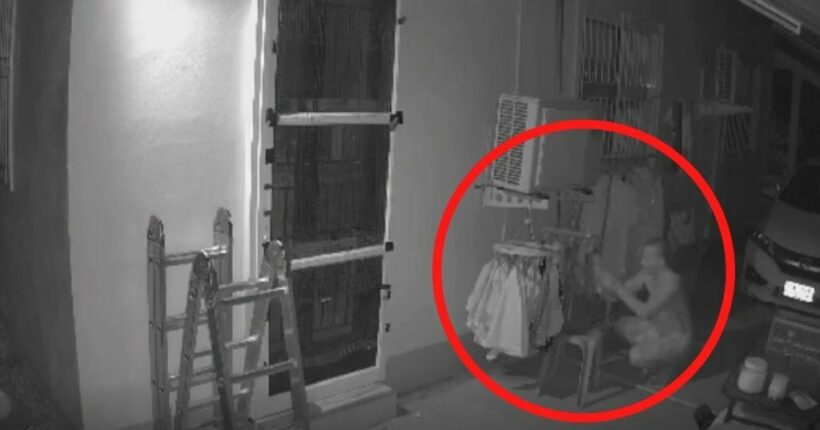 A Thai TV star searched the quarters of a monk accused of stealing ladies’ underwear and found both men’s and women’s underwear in the monk’s luggage.

The couple living nearby the temple in the central province of Chachoengsao checked the CCTV footage after the wife’s underwear went missing and say they saw a monk taking the panties off a hanger at their house. They made a report with the police, but there were no developments, so they sought help from a celebrity volunteer known as Mor Pla, or Doctor Pla. The TV star helped tracked down and identify the monk who allegedly stole the underwear.

Thai media followed Mor Pla to the temple quarters for the monk, Phra Kaisorn, who had fled the temple before people arrived. Inside the room, belongings were packed up as if the monk was moving out and luggage stuffed with men’s and women’s underwear.

The abbot at the temple shared he didn’t know about this before and didn’t know where the suspect went. He added that Phra Kaisorn had just entered the monkhood and had moved from a temple in Prachin Buri province three months ago. The abbot said he didn’t have phone numbers or any documents of Phra Kaisorn. The abbot also added that the monk made a mistake, but didn’t need to leave the monkhood.

Marble-eye
It's fine, just as long as he doesn't make a habit out of it.

riclag
16 minutes ago, Marble-eye said: It's fine, just as long as he doesn't make a habit out of it. A rather cheeky chap say what

DoUKnowWhoIAm
When he gets disrobed, guess what he's wearing underneath 🤮
Rookiescot
Oh let he who has not done a bit of knicker knocking cast the first stone. Wait I have said too much.

PapayaBokBok
1 hour ago, Rookiescot said: Oh let he who has not done a bit of knicker knocking cast the first stone. Wait I have said too much. That knickerbocker has knicked those knickers indeed!