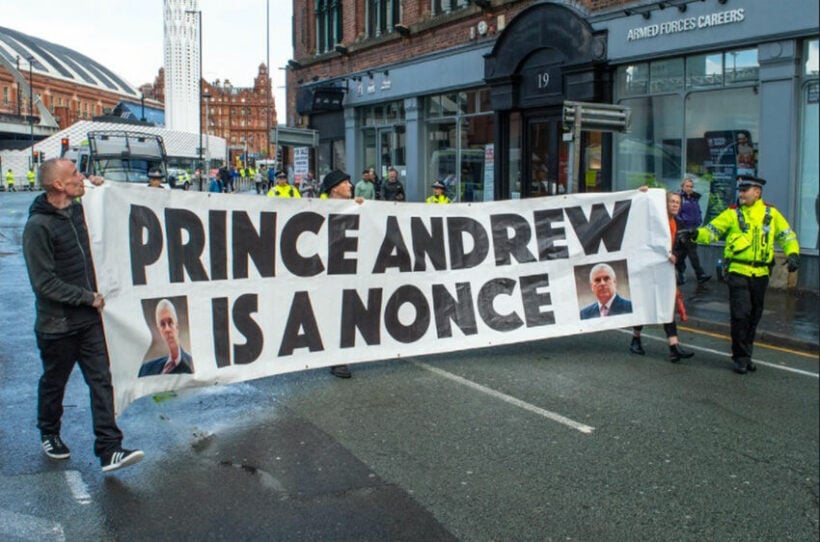 A sign at a protest during the Conservative Party Conference in the UK. PHOTO: Flickr/The Man Who Collects Eyeballs

The British prince formerly known as His Royal Highness has quit social media amid a barrage of negative publicity ahead of a civil lawsuit in the US. Prince Andrew faces a civil case brought by Virginia Giuffre, a now 38-year-old woman, who accuses him of sexual assault and battery when she was just 17. Giuffre says she was trafficked by deceased paedophile Jeffrey Epstein, who introduced her to the prince.

Andrew denies the allegations, but in the wake of the scandal and seemingly to distance her son from the monarchy, the Queen of England recently revoked the title His Royal Highness, along with honorary military titles previously bestowed on Andrew. Now, according to an AFP report, the prince has deactivated his social media accounts.

Andrew’s attempts to have the civil charges against him dropped were dealt a hammer blow recently when a US judge refused to dismiss the case. Meanwhile, in the UK, he has become a source of ridicule after a BBC interview in which he made bizarre statements in an attempt to vindicate himself. They ranged from claims he couldn’t sweat (in response to a quote from Giuffre that he had been sweating profusely) to suggesting a photo showing him with his arm around the victim had been photoshopped.

The backlash in the UK has been significant. AFP reports that a racecourse in York, northern England, says it will rename an event called The Duke of York Stakes – despite the event being named after a previous holder of the title. And a police station in Devon, southern England, has removed a plaque that says it was opened by the Duke of York. According to a BBC report, this was after a member of the public filed a complaint.

TheDirtyDurian
Good. If only the rest of the royals would get shut down too.
JamesR
Who would want to be famous these days, for us 'normal' people we are innocent until proven guilty, if you are famous you are guilty until you are proven innocent as far as the nutters on facebook and other media…

Vince
12 hours ago, JamesR said: Who would want to be famous these days, for us 'normal' people we are innocent until proven guilty, if you are famous you are guilty until you are proven innocent as far as the nutters…
Fanta
I can’t help think that a lot of this is all about the money. Guffrie received $US 500,000 from Epstein as hush money. She tried and failed to get money from another English guy. Who knows how many people secretly paid her?…