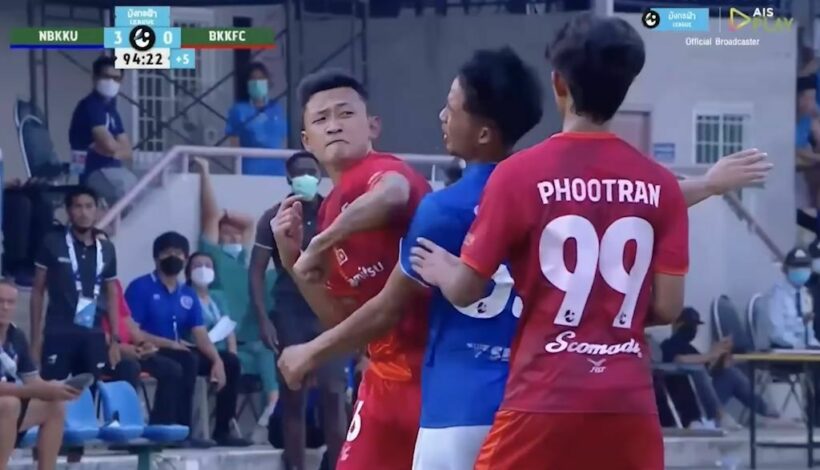 A Bangkok Football Club player was sacked after he left his opponent needing 24 stitches after an elbow strike to the face, knocking him to the ground during a Thai League 3 match on Sunday afternoon. The referee sent Aitesaret Noichaiboon off immediately and the club proceeded to terminate his contract.

Bangkok FC were losing 3-0 against North Bangkok University FC when Supasan Ruangsuphanimit caught Aitesaret’s heels in the fourth minute of added time. Aitesaret ran up to his opponent and brutally elbowed him in the face. Supasan dropped to the floor and went to hospital to get a total of 24 stitches on his upper lip.

Bangkok FC issued a statement on via their Facebook page…

“Bangkok FC would like to express that we do not support unkind actions of any kind in sport, including violence on the football pitch.

We have terminated Aitesaret Noichaiboon’s contract due to his wrongdoings toward a fellow sportsman with immediate effect.

We would like to express our condolences to the injured player for the incident and we will take all action to prevent this from happening again”.

Pinetree
1 minute ago, Rookiescot said: Friend of mine was once headbutted by a referee and when he came too it was to discover he had also been sent off as well. Scottish football. What we lack in quality we make…

Marble-eye
5 minutes ago, Rookiescot said: Friend of mine was once headbutted by a referee and when he came too it was to discover he had also been sent off as well. Scottish football. What we lack in quality we make…

Marble-eye
9 minutes ago, Pinetree said: Well, you have to do something to spice up what is essentially an incredibly boring sport, played by pussies. 😺 Try telling that to Peter Bonetti.
Rookiescot
7 minutes ago, Marble-eye said: I miss the hard Scottish players like Andy Gray and Joe Jordan, when Joe took his false teeth out he looked like a mean machine. But was at Wembley in 1977 when the Scots beat…
HiuMak
Muay Thai Football Style