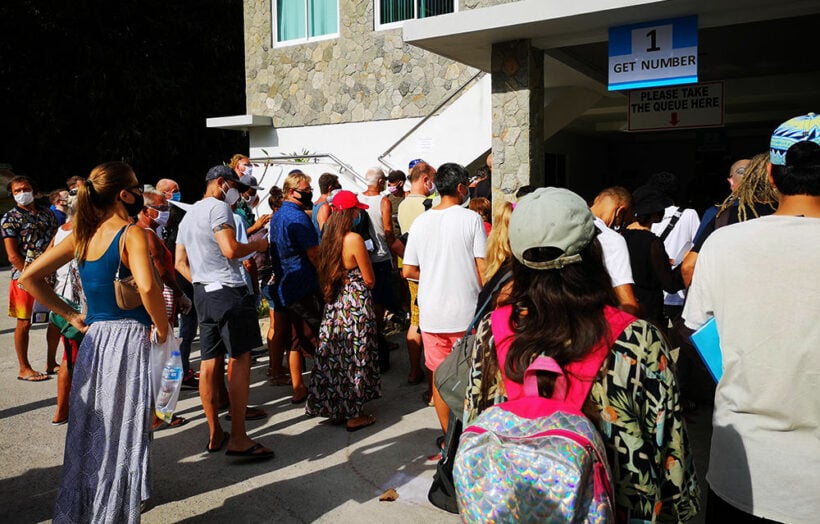 “Under the government’s social distancing policy, these tourists will no longer have to visit the immigration bureau and risk contracting the virus in a crowd.”

Thai Immigration officials are seeking cabinet approval for new measures to categorise foreigners stranded in Thailand because of the Covid-19 crisis. The proposals will be submitted to tomorrow’s cabinet meeting.

Last week Thai TM Prayut Chan-o-cha expressed concerns about foreigners who are stuck in Thailand after flights were in short supply and many countries had, as Thailand has, locked their borders to incoming passengers. Social media has been full of complaints from well-intentioned expats and visitors who have been forced to wait for hours in queues trying to sort out their immigration woes. Of course their main concern has been the lack of social-distancing.

There will be three classifications…

Bangkok Post reports that foreigners in the first group are normally required to return to Thailand within 12 months of their departure and because they might not be able to re-enter the country in time, the Immigration Bureau will propose extending their compulsory return deadline until after the pandemic subsides.

“The extension of the return period would not affect any immigration rights and benefits they usually receive when strictly following the one-year return period requirement.”

But immigration officials are advising them to return to Thailand as soon as they can after the situation improves and they can safely travel again.

“For foreign tourists in the second group who reported to immigration authorities for a 30 day extension after their visas expired on, or after, March 26, their visas will be automatically renewed every 30 days until the pandemic subsides.”

The updated measures, as recommended, won’t apply to any foreigners who are currently working and/or have a family in Thailand.

“They will still be required to report to immigration authorities regularly.”

“For visitors from neighbouring countries in the third group, they will be allowed to stay in Thailand until the borders are re-opened. They will be required to leave Thailand within seven days after the borders reopen.”

“Foreigners who are in Thailand and affected by the Covid-19 crisis, but not covered in the three new categories are advised to adhere to the usual laws,” (meaning they will likely be required to report to a local Immigration office).

NOTE: These proposed measures are currently NOT in place and will need cabinet approval and an official announcement before they are.

Reimbursement for medical bills for Covid-19 in Thailand