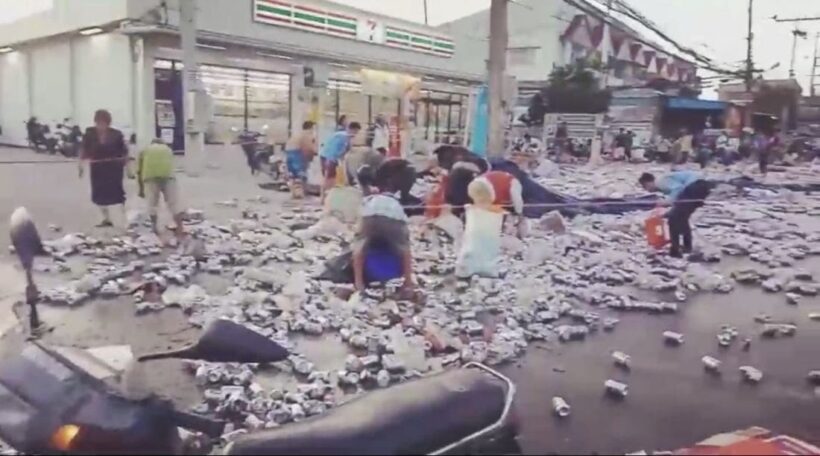 A logistic company representative has filed a report to police after more than 80,000 beer cans, valued at more than two million baht, mysteriously vanished after a beer truck overturned in Rassada this morning.

The truck overturned and beer cans were scattered all over the road outside a 7-11.

Locals nearby helped clear up the mess and, perhaps, may have taken a few cans home.

The Phuket City Police Chief Col Sompong Thiparpakun says, “This incident is divided into two cases. The first case is the traffic accident which police are now investigating as the truck damaged nearby food stalls and vehicles.

“The second case is theft. There are many pictures and videos. If anyone who took those beer cans and returned back, they are still guilty. ”

At 2pm a representative of the logistics company had already file a report to the Phuket City Police.

58 year old Sompohn Primjaras, the truck driver of Sirimongkon Logistics, was carrying about 86,400 beer cans. He was delivering to a company in Rassada which was only one kilometre beyond where he had the accident.

He told police that he was only driving the trailer at 40km per hour when it flipped as he came around a curve.