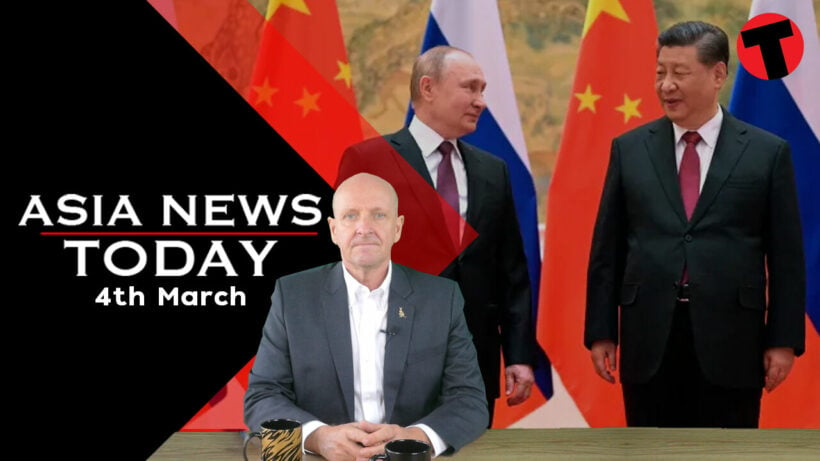 Japan is looking to ease border restrictions allowing more people to arrive. While at the same time extending infection control measures to limit the spread of the coronavirus, officials say they are wanting to ease arrival procedures, especially for students. Japan’s PM Fumio Kishida says the number of people who can enter Japan will rise to 7,000 a day from the current cap of 5,000 people. Students will be exempt from this daily quota and considered in a separate category. Some 150,000 foreign students have been unable to return to their studies in Japan since 2020, along with migrant workers that have been vital to Japan’s economy with both an aging and shrinking population. Hospitals in Japan remain under stress even as the countries Covid cases appear to have peaked and are now falling since the highest numbers in early February. But the number of daily deaths in the recent wave has been more than twice the number in earlier waves.

South Korea’s PM Kim Boo-kyum has tested positive for Covid yesterday, as daily infections reached their highest levels this week, driven by the spread of the highly transmissible Omicron variant. Despite the surge in infections in South Korea, Kim has continued holding regular meetings with health officials, visiting medical and educational facilities and helping to promote vaccination around the country. Speaking to media this morning, an official from the PM’s department said that… He was coughing a bit this morning but is now only having mild cold symptoms. The Korea Disease Control and Prevention Agency reported 198,803 new COVID infections over the past 24 hours.

Still in South Korea and nearly seven in ten South Koreans reported a drop in income over the past 2 years. In the survey by the Korea Institute of Public Administration, 68 percent reported that their average monthly income was lower in 2021 than in pre-pandemic days. Only 30 percent report their income rose, while the remaining 2 percent said it was unchanged. The income decrease appeared to be attributable to shorter working hours amid the pandemic, saying that they stayed longer at home, did house chores and spending more time with their family. South Koreas’ anti-virus measures were generally supported by the population, with the mandatory face mask rule, self-isolation of all inbound travelers and no public gatherings on adult entertainment facilities.

Philippine President Rodrigo Duterte has signed an order to include nuclear power in the Philippine’s future energy resource list. Authorities are preparing to phase out of coal-fired power plants after earlier efforts failed due to safety concerns. The decision was made last week although the order was only made public yesterday. Pundits say that it could be a game changer for the Philippine economy which suffers seasonal power outages and high electricity prices. Signed just three months before the end of President Duterte’s six year term as Philippine president, the order also directs a panel to look at reopening the mothballed Bataan Nuclear Power Plant. Duterte claims that nuclear power would be tapped as a viable alternative power source as the Philippines seeks to retire its coal plants.

Russia’s invasion of Ukraine is said to potentially undermine China’s attempts to bring Taiwan under its control… this latest assessment is from the Washington-based think tank, the Council on Foreign Relations. In a recent column David Sacks, who writes about cross-strait relations and Taiwan’s long-term security, he says that Russia’s invasion of Ukraine has “increased Taiwan’s salience in Washington, Brussels, and Tokyo” and made a strong allied response to a potential Chinese invasion more certain. In his most recent article, Sacks says Russian militarism is again undermining China’s designs on Taiwan and that the actions over the past week have spurred on a new debate in Washington over security policy, saying that the U.S. should focus its finite military resources on defending Taiwan. His article states that the crisis in Eastern Europe will also spur defence spending in Taiwan.

The Malaysian government is working on travel bubble talks with 12 countries. The country’s Foreign Ministry says talks are underway with several countries, both within the ASEAN region and beyond, and will be aimed at introducing Vaccinated Travel Lanes… the current preferred method of border control in Singapore at this time.The Malaysian government is negotiating with Brunei, Indonesia, Singapore, Vietnam, and Thailand… all under the ASEAN umbrella. The other countries are Australia, China, India, Japan, New Zealand, South Korea, and the UK.Malaysia was originally intending to reopen its borders at the start of March but surging Omicron cases have forced health officials to modify the reopening plans.

And still in Malaysia… and completely unrelated…McDonald’s Malaysia is reportedly planning to invest US$322 million to open 205 new McRestaurants as part of the company’s five-year business plan.They claim the plan will create 50,000 new jobs for local people.McDonald’s Malaysia MD Azmir Jaafar said the plan will increase the company’s store count in Malaysia to 500 by 2026.All the new restaurants will be in Malaysia’s second and third tiers cities with investments ranging up to $1.6 million US for each store.The five-year plan will also focus on drive-through facilities and invest in upgrades to the country’s 155 existing restaurants.

Japan will extend by at least another two weeks the country’s quasi-emergency curbs that were due to expire this Sunday. The Japanese PM says he’s reacting to an expert panel that warns that the Omicron strain was far deadlier than the seasonal flu.He says that their analysis underlines the potential risks of lifting pandemic restrictions too soon whilst Japan’s healthcare institutions and hospitals remained under a strain.Mr Kishida also advised residents against “risky behaviour”In at least Japan, Hong Kong, Thailand and South Korea, the Omicron variant has been more virulent than in some other countries and the cases and impact on hospitals continues to be a public health issue.

Guest1
open 205 new McRestaurants / will increase the company’s store count in Malaysia to 500 by 2026 / 155 existing restaurants. I'm loving it, how math works, sometimes