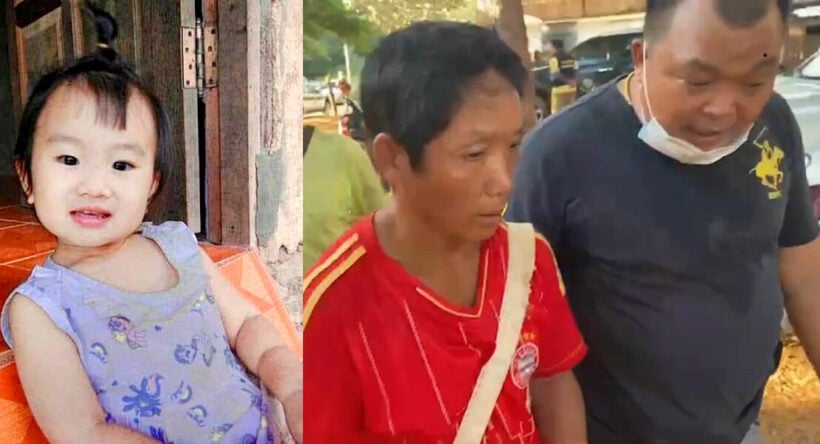 PHOTO: Baby girl Nong Gina was found after a Burmese man admitted to leaving her at a cave as a sacrifice. (via khaosod/mrgonline)

In Chiang Mai, a toddler, who has been missing since Sunday evening, has reportedly been found. A man allegedly admitted to kidnapping the girl, who is almost 2 years old, and leaving her outside a cave as a sacrifice to the spirits of the mountains and forest. She was found in a hut just outside the cave.

The 44 year old Burmese man reportedly gave rescuers directions to the cave, about 3 kilometres from the village the baby girl lived in, where he allegedly left the 23-month-old girl known as “Nong Gina.”

Over the past few days, multiple police agencies and volunteers have been working together to find the missing child. Heat-seeking drones and sniffer dogs have also been used. Divers and a rescue unit also searched a pond near the village.

According to Thai media, the man said a spirit in the forest told him he wanted a child to live with him. The man saw Nong Gina walking alone and decided to take her to the forest as an offering to the spirits.

The girl was taken from near her home in Ban Huay Fak Dap in tambon Inthanin of Mae Taeng district and police had detained the Burmese man, identified as Siew, considering him a prime suspect. The man is said to be a friend of Nong Gina’s father.

After 2 days of forceful questioning in which Siew avoided answering direct questioning, he finally confessed Wednesday morning but swears he only left the girl in front of the cave and had not killed her.

After his confession, he led the police to the cave and police were able to find and recover the missing baby girl in a hut near the cave.

[This story is currently unfolding live and The Thaiger will update as new information becomes available.]

Endeavour
15 hours ago, ThaiFoodGuy said: Reminds me of a VICE story I read years ago - I've shown this to Thai friends with mixed reactions. The more superstitious ones see this as very good and powerful magic, a few cringed…
Bob20
Apparently the investigation is ongoing as a second person may be involved... https://www.chiangmaicitylife.com/citynews/local/police-suspect-another-person-involved-with-ginas-kidnapping/

Fluke
2 minutes ago, Bob20 said: Apparently the investigation is ongoing as a second person may be involved... https://www.chiangmaicitylife.com/citynews/local/police-suspect-another-person-involved-with-ginas-kidnapping/ Lets hope that the Police fully investigate  this , I wouldn't be surprised if the "ghost" story is just to cover up…

ThaiFoodGuy
10 hours ago, Endeavour said: This weird/dangerous stuff still exists.  Yikes :/ I did Muay Thai for many years, and one of my Thai trainers insisted I draw symbols with my foot in my opponent's corner to summon spirits bringing…
Bob20
Update:   https://www.bangkokpost.com/thailand/general/2179351/three-held-in-nong-gina-probe