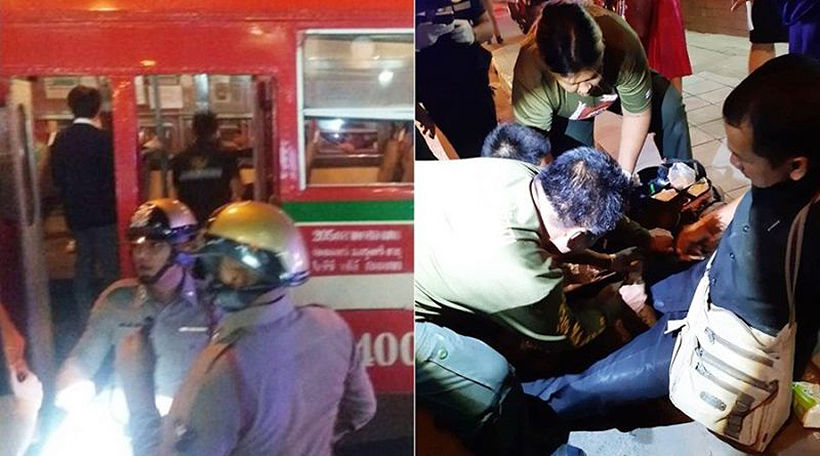 A passenger has blown their fuse at a 25 year old busboy travelling near Khlong Toei in the capital. The passenger threw his ticket money away and started yelling at the busboy. Another passenger, witnessing the outburst, went to the aid of the busboy and was stabbed by the angry passenger before he fled the scene.

The Tungmahamek Police were notified of the stabbing on bus Number 205. The bus was parked at Rama 3 Road heading to Sathupradit Road in the city. Police headed to the bus with a rescue team from the Ruamkatanyu Foundation. The bus was parked on the side of the road with the injured man still inside being helped by other passengers.

45 year old Chaiya Sang was stabbed in his right leg by the other passenger. He was given first aid before being transferred to the Kluaynamthai 1 Hospital. Police located a plastic bag inside the bus with a 5 inch knife, glasses, one black sneaker shoe, a mobile phone, and hat that was left behind by the suspect.

The busboy told police that the suspect was around 45 years old with short hair, was thin, tall, wears glasses, and was wearing a black T-shirt. He says he had walked to the back of the bus where the suspect was sitting to collect his ticket money.

The busboy told police he had no idea why the suspect suddenly became angry. When the busboy put his hand out to accept the money from the suspect, he threw the coins away instead of handing it to receive his ticket.