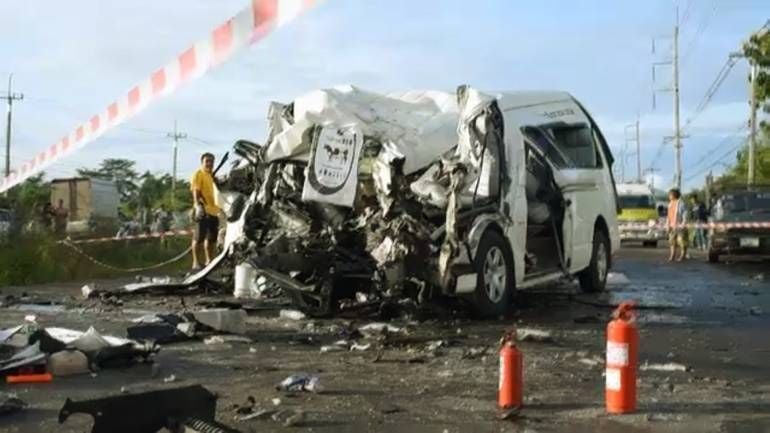 Following a collision between an articulated truck and a passenger van killing 11 people and injured 4 yesterday morning, the Transport Minister is calling for an investigation. The accident happened in Sa Kaew province, about 200 kilometres east of Bangkok.

Thai PBS reports that the van driver was among those killed, crushed to death behind the steering wheel. While the GPS system showed he was not speeding, investigators speculate he may have fallen asleep at the wheel.

The crash totally destroyed the front of the van, although the truck was not badly damaged. The passengers were all from Laos, travelling to Bangkok from Svannakhet provice for visa renewals.

Transport Minister Saksayam Chidchob says unroadworthy vehicles account for 2.9% of accidents, with unfit drivers being the cause of 72%.

The minister said that the Land Transport department has been instructed to strictly enforce the law on the road worthiness of public transport vehicles and the fitness of drivers. Vehicles found to be unsuitable should not used and unfit drivers should have their licences revoked.