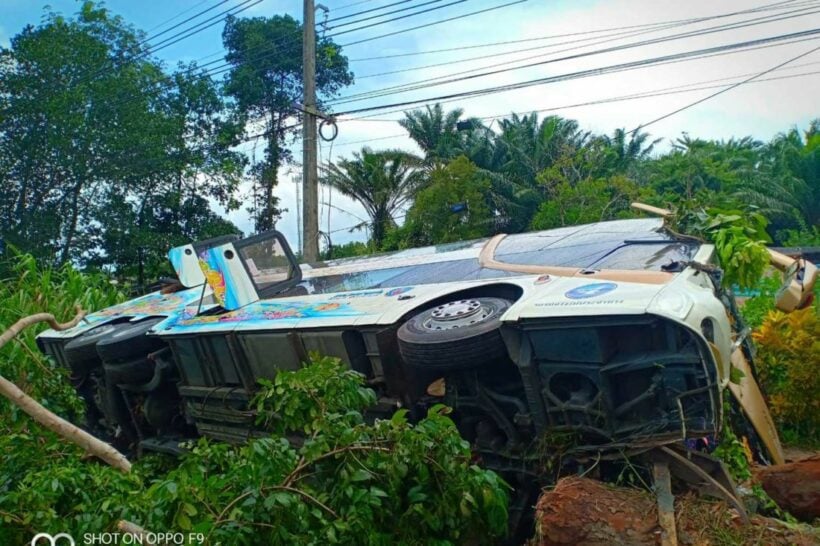 A bus crew has been killed after a tour bus travelling from Hat Yai to Bangkok for a mathematics competition ran off the road and hit a tree. The driver and 18 student were all injured. The bus ran off the main road in Chumpon, about half-way through the journey north.

Police and foundation rescue workers headed to the scene where they found a young man dead and 19 others, mostly students, trapped in the wreckage. Everyone was pulled out of the partly overturned bus and taken to hospital.

The deceased was identified as 17 year old Prompiriya Semneng, the bus crew.

27 year old bus driver Warodom Chudrung told police in hospital that he was feeling sleepy and was trying find a place to park the bus and rest. He says he suddenly woke up when the bus hit the tree.

The 18 students included 12 girls and 6 boys from the Hat Yai Witthaya 2 School in Songkhla province.

A maths teacher from the Witthaya 2 School told police that they’d rented the two tour buses to take the 72 Mathayom Suksa 1 students to Bangkok. The buses left Hat Yai at sunrise to attend the maths camp at Siam Park City in Bangkok.

Police say the driver will be remanded in custody and charged with reckless driving causing death.