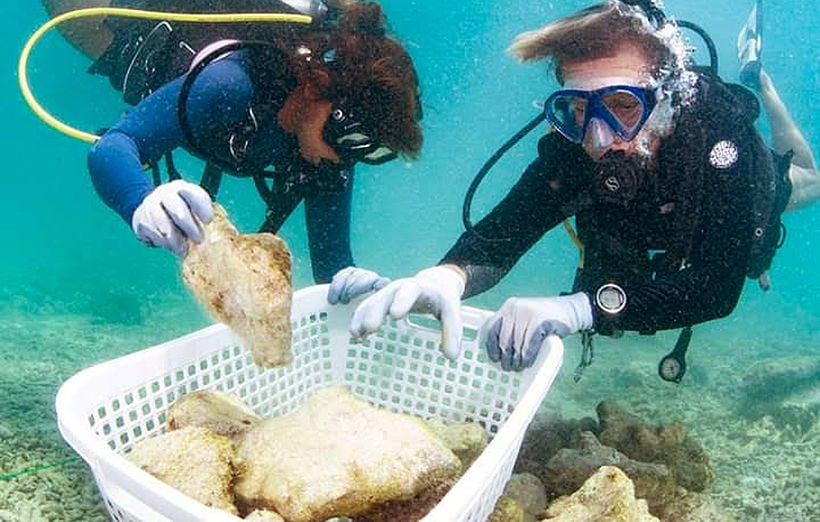 Coral bleaching and the annual monsoon are the only threat to the ongoing recuperation of Maya Bay, now that tourists have been away for a year, and probably another two years as well.

Maya Bay, on Koh Phi Phi Ley in Krabi province, has been closed since June 1 last year after the environmental destruction of the pristine beaches ecology became obvious, even to the national park chiefs who were under a lot of pressure from tourism operators to keep it open.

Now, park officials are busily relocating about 23,000 young corals from the shallows into deeper water to prevent them being damaged by strong waves during the monsoon season which runs from May to the end of November each year.

Worapote Lomlim, chief of Haad Nopparat Thara Phi-Phi Islands national park, told Thai PBS that the ecological system and environment of Maya Bay have improved satisfactorily after the bay was closed to all unauthorised visitors and tourists almost 12 months ago.

He noted that coral bleaching has not been as serious as last year, the corals have regenerated and black-tipped coral sharks have returned to the bay. But he noted that the young corals may sustain damage from powerful waves if they are not relocated into deeper waters during the current monsoon season in the Andaman Sea.

Maya Bay will remain closed for at least the next two years for the protection of its environment and ecological system. A new system of limited tourism, protective walkways and boat mooring facilities is being prepared whilst the bay is closed in preparation for an eventual re-opening to tourism.