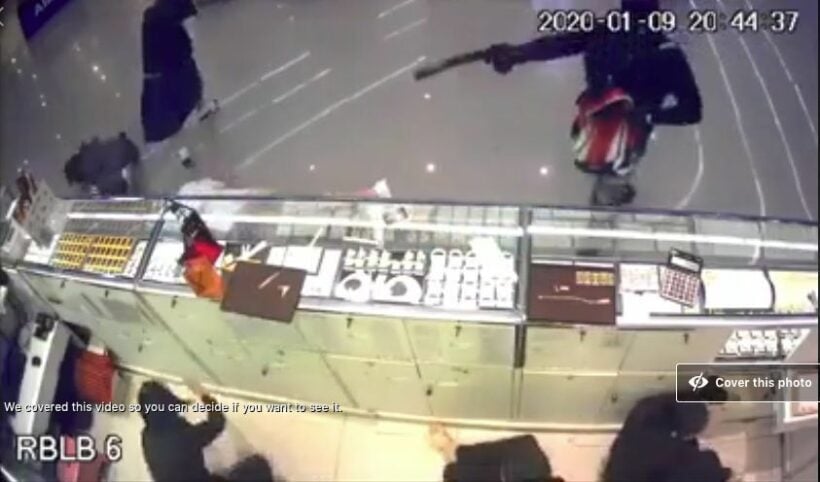 PHOTO: The gunman strolled in and systematically shot customers and staff - CCTV screenshot

Police and authorities now suspect that the motive for Thursday’s brutal and deadly attack, which killed three, including a toddler, may not have been robbery. The lone gunman stormed into a gold shop at a Robinson’s Shopping Centre in Lopburi, Central Thailand, and systematically shot and killed customers and shop staff.

The Crime Suppression Division is running background checks on all victims of the shooting at the Aurora gold shop in Lop Buri’s Robinson Shopping Mall as the armed thief took such a small amount of gold. Three people including a two year old were killed and four others wounded, in what appeared to be a  robbery where the their got away with such a small amount.

The gunman, wearing a ski mask, black shirt and camouflage trousers, fired on staff and customers as he approached the counter. He was armed with a pistol and silencer, and grabbed three trays of gold, worth only about half a million baht.

A shop assistant was killed and the two year old boy, who was shot in the head as he walked past with his mother, died later in hospital.

The “robber” also shot and killed a security guard on his way out before jumping on a motorbike without a licence plate, and fled the scene. CCTV cameras captured his arrival, crime and departure but police say they have no leads in the investigation up to date.

Two of the wounded were a prominent local husband and wife business couple, who were shopping for jewellery with their daughter when the armed gunman opened strolled into the shop. They underwent surgery and are currently in a stable situation. The daughter was unharmed.

Police speculate the suspect is probably still in Lop Buri and expect to arrest him within three days, without providing any further exclamation of their progress. Security camera footage shows that he arrived at the store alone.

A police spokesman says the man used a CZ P-01 tactical 9mm pistol with a long silencer, an expensive weapon which was “unlikely to be unregistered.” There is currently a 600,000 baht reward being offered for information leading to the gunman’s arrest.

Central Thailand woman battles snake that appears from the toilet