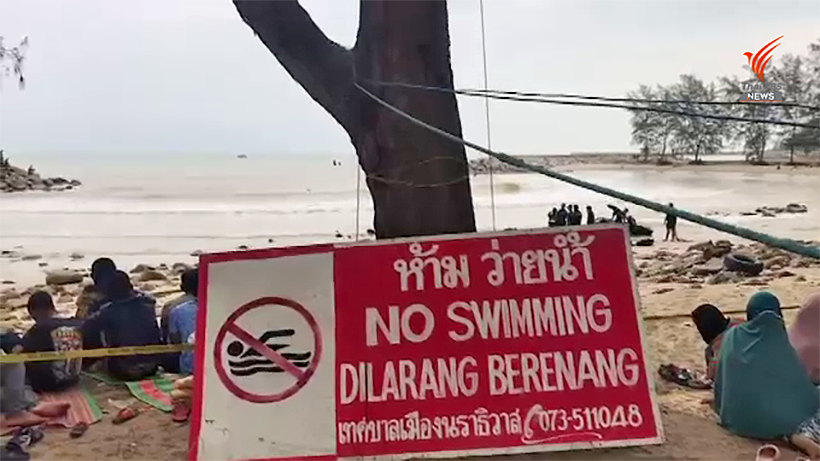 PHOTO: Failes and friends wait for any good news during the weekend's search - Thai PBS World

Search and rescue volunteers and officials in Thailand’s south spent all yesterday searching for two young girls who went missing. At this stage the two are believed to have drowned. The pair were swept into deeper waters by a series of large waves in the Gulf of Thailand seas off Naratat Beach in Narathiwat province on Saturday.

Strong winds and waves have persisted over the weekend hampering search and rescue efforts.

8 year old Nulfadia Sala and 9 year old Fatin Binmading were celebrating National Children’s Day with their parents and other children.

Whilst they were playing close to the shoreline, strong waves ran up the beach “without warning”. Four children, in one section along the beach, were swept off their feet but three of them, except Fatin, were quickly rescued from the foaming seas by people on the beach. At another location along the beach, another three, except Nulfadia, were saved by rescuers. The pair of missing girls weren’t playing together at the time but it was the same set of ‘freak’ waves that swept the children into the water.

Narathiwat’s governor Thana Wittayanupong headed straight to the scene of the incident and set up an emergency rescue centre to coordinate the search for the two missing girls.