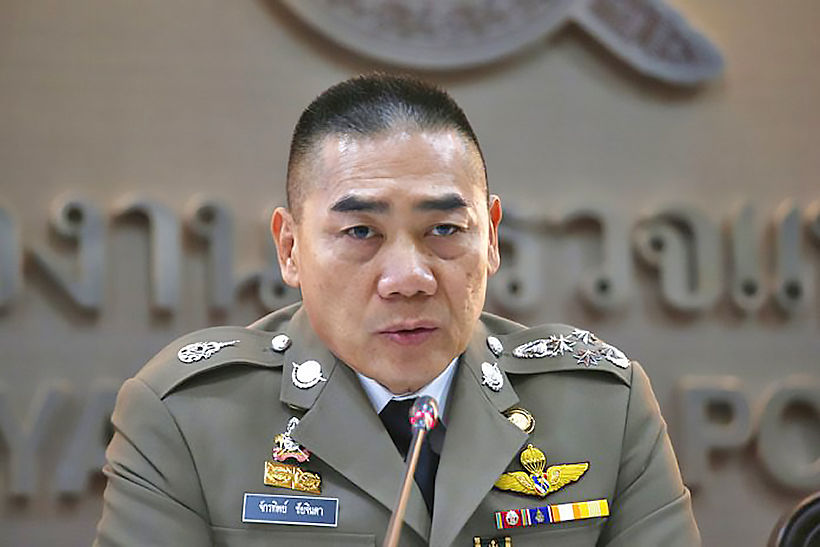 Further to a story reported earlier in The Thaiger, things are heating up in the central province of Samut Prakan, just south of Bangkok. A surprise visit by national police chief Chakthip Chaijinda at the Klong Dan police station last week has exposed alleged acts of assault and extortion by a suspected gang of criminal policemen.

The officers on duty had no idea why their highest supervisor made a personal appearance, but intuition told them it wasn’t a courtesy call. Last Friday, 16 people led by high-profile activist Atchariya Ruengrattanapong, head of the Help Crime Victims Club, also visited the station.

Chakthip was investigating a complaint lodged by the group, who accused six policemen attached to Klong Dan and Bang Phli police stations of assaulting, torturing and extorting money, threatening to file drug charges against them. The victims included a couple whose young children were also allegedly forced to suffer through the ordeal.

On his return to the Royal Thai Police headquarters, Chakthip sent for Chumpol Phumphuang, head of Samut Prakan police.

A police source revealed that they had an urgent meeting, at which Chakthip was formally briefed on the progress of the investigation into the extortion case.

To ensure transparency in the probe and ensure it’s free of meddling, the 3 most senior officers at the station – the superintendent, deputy superintendent and chief inspector – have been transferred to inactive posts at the provincial police headquarters pending the results.

Barely 24 hours after the transfers were ordered, action against 6 officers began. The officers, who worked in the crime suppression unit or as investigators, were suspended from duty pending investigations, and potential criminal and/or disciplinary charges. All but 2, who were with Bang Phli district police, were attached to the Klong Dan station.

Atchariya says 4 civilians may also be complicit in the crimes. He described 3 extortion cases allegedly involving nine of the 16 victims.

In the first case, a man identified only as “Teh” was a police informant who had dealt drugs. With a history of drug abuse, Teh was abducted by the 6 policemen, who assaulted him and forced him to reveal people who could be set up for extortion.

After the assault, which left Teh with permanent damage to his right eye, he was released. Fearing for his life, Mr Teh lured a couple he knew from the Nong Chok area of Bangkok to meet him on April 5.

Teh pretended he was interested in buying drugs. He then took them to a nearby mosque in Klong Dan district to finalise the drug deal. There, 3 of the 6 policemen swooped on and arrested the couple.

The officers later took the couple to Klong Dan police station, where they were allegedly beaten. Atchariya says the couple were then told to pay up to avoid criminal charges.

The next morning the wife handed over 200,000 baht and the policemen let them go.

In the second case, which allegedly occurred last year, another couple with a 3 year old child were reportedly similarly extorted by police.

36 year old Nanthawat Ob-orm says he was driving his family home to Bangkok from Rayong province when he received a call from a friend who asked to meet him at a petrol station in Bang Phli district.

When he arrived at the petrol station, policemen appeared and searched his vehicle for drugs, but found none.

They “escorted” the family to a local football pitch, where they allegedly assaulted them and threatened more physical violence if they did not pay them 100,000 baht. Atchariya says that when Nanthawat told the police he didn’t have the money, they took the family to a bungalow on Sukhumvit Road, where the couple were detained in one room and their child in another.

The family spent two nights there and were allegedly subject to torture.

Nanthawat says he managed to scrape together 52,500 baht and gave it to the policemen, who then released the family.

In the third case, a baby sea bass trader was allegedly arrested in Chachoengsao province in April by the police gang, who accused him of having up to 800 methamphetamine pills in his possession. The man was detained at a private residence having drinks with his friends, who included former police officers. He was taken to the Klong Dan police station for questioning and forced to sign documents admitting to drug charges.

The policemen allegedly told him to bring 200,000 baht in return for his freedom. He paid the money and was freed.

Chumpol says the investigation into the 6 officers is expected to be wrapped up this week after the victims positively identify their assailants.

“There’s reason to believe the policemen have committed these crimes. But at this point, no other police officers have been implicated in the case.”

Chumpol stressed that commanders must monitor their subordinates’ conduct and act swiftly against rogue officers who abuse their status for illegal gain.