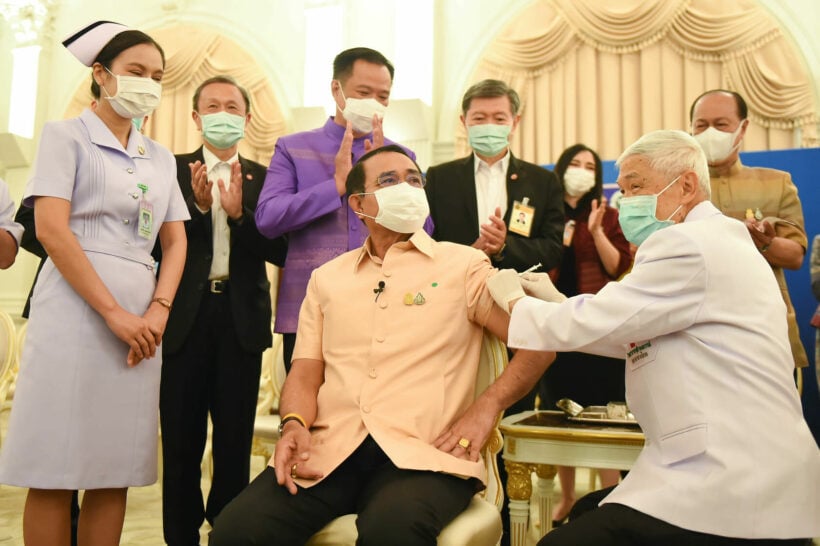 PM Prayut Chan-o-cha got the first AstraZeneca jab in Thailand this morning after a short delay due to safety concerns. A government spokesperson called the prime minister’s inoculation “historic.” The jab kicks off Thailand’s AstraZeneca vaccination programme.

Prayut’s vaccination plans were suddenly postponed last Friday and the country’s rollout of the AstraZeneca vaccine was put on pause due to concerns that the vaccine could be related to an increased risk of blood clots.

The AstraZeneca Covid-19 vaccine, developed in partnership with Oxford University, had been suspended in some European countries after some patients developed blood clots sometime after receiving the vaccine. Only a few patients out of millions in Europe who got the vaccine reported “thromboemoblic events.” Both the European Medicines Agency and the World Health Organisation have stated that the AstraZeneca vaccine is safe.

Prayut initially planned to get the Chinese-made Sinovac vaccine last month, but cancelled plans after some doctor’s advised him against it due to the lack of research for those over 60. Public Health Minister Anutin Charnvirakul was the first to get the Sinovac jab.

This morning, media were barred from attending the prime minister’s formal vaccination event at the Government House in Bangkok, but the process was live streamed on the government’s Facebook page. Prayut went through a health check before Thailand’s top virologist Yong Poovorawan administered the jab.