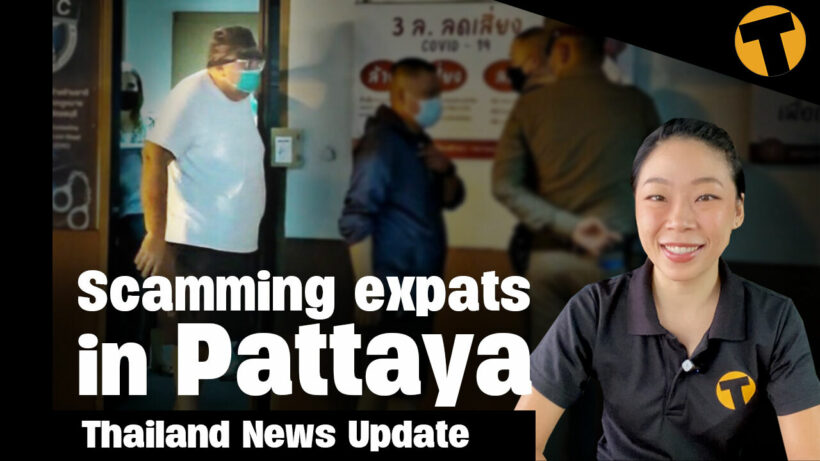 A Frenchman is facing fraud charges for allegedly scamming expats in Pattaya out of millions of baht by claiming he had connections with several Thai authorities, and promising help with obtaining visas, opening businesses, and buying motorbikes and cars.

Reports claim he scammed expats out of a total of 6.3 million baht.58 year old Herve Christian Robert Leonard from Compiegne was arrested in Prachuap Khiri Khan. According to police reports, another man, Romain Jules Robert Leonard (it’s unclear if the suspects are related), is also facing fraud charges for involvement in the alleged scams.

One victim, an orthopaedic doctor in Pattaya, told police that Herve visited his clinic back in 2016 and told him that the business was under investigation by Thai police, warning that he could face jail time and be blacklisted from the country.

Herve allegedly brought four to five people to the clinic who claimed to be Thai authorities who said were investigating the case. They allegedly asked the doctor for 80,000 baht in “investigation costs.” The victim told police that Herve then asked for another 80,000 baht to renew the business registration.

Several other victims say Herve scammed them out of hundreds of thousands of baht for costs for a visa and to open businesses. Herve has also overstayed his visa by a year, four months and 27 days. He’s reportedly denied all charges.

Thailand is revising surrogacy laws to allow foreigners to hire Thai surrogate mothers without requiring one partner to be Thai. Under the proposed changes, foreigners will also be allowed to take the eggs and sperm out of Thailand for surrogacy overseas.Revisions to the law are aimed at promoting Thailand as a medical hub, including in the IVF specialty.

The revision is expected to take around two months to complete before being sent to Cabinet to consider.Under the present rules and conditions, surrogacy in Thailand is allowed only for Thai couples or foreigners who have a Thai partner.

Those in Thailand also cannot send their frozen eggs or sperm overseas. If the law is revised, there will be a system for Thai women interested in being a surrogate to register to make sure that the children will not be trafficked. During the nine months of pregnancy and after delivery, hospitals will have a tracking system to check on the mother and baby.

Meanwhile…. Thailand’s falling birth rate is creating concern as authorities ponder the havoc on the country’s long-term economy. Experts say the trend will see the country’s workforce shrink and more senior citizens adding to the burden of their relatives.

The Deputy Public Health says the declining rate is threatening to unleash a host of problems, especially considering the nation’s average life expectancy is set to increase, from between 70-80 at present to 90-100 in the next few decades.The problems, he said, range from labour shortages to social and economic malaise.

Following the second oil leak off Rayong’s coastline last week, not only was leaked crude oil still appearing Mae Ramphueng Beach, but a Thai tourist says the water reeked of oil and his body was covered in oily stains after a swim.Another local shared a picture of what looks like a coral-covered with a black coating.

Locals say they are worried about the effects of the leaking oil on the natural resources and local economy and wanted authorities to deal with the problem immediately.Pathom Chumyen, the tourist who visited Mae Ramphueng Beach yesterday, told Thai media that he knew about the oil leak, but decided to travel there because Rayong authorities confirmed that there was no more oil in the ocean or on the beach.

But when he went for a swim, the smell was so bad, he had to get out. He then noticed his body was covered with oily stains. He told Thai media that he is worried about the effects on natural resources and wanted the authorities to get rid of them as soon as possible.Yesterday, Thai authorities and staff from the Star Petroleum Refining company were cleaning the oil spill on the beach. Sticky black oil spread over a kilometre along the beach, and officers picked up the blobs of oil and put them into plastic bags.

After a two-year hit on tourism, elephant and tiger attractions in Thailand are running low on money and are asking the government for financial assistance. Zoo operators met with the Tourism Commission yesterday at Tiger Kingdom in Chiang Mai, citing their struggles during the Covid-19 pandemic.

The daily income for Tiger Kingdom in Chiang Mai, as well as the location in Phuket, dropped from 1 million baht to zero due to closures and a lack of tourists, according to the managing director of Khum Sue Trakarn, a company that operates the two tiger parks. The call has gone up from other parks focussing on animal tourism around the country.

Meanwhile, a number of elephant sanctuaries operate on undocumented land, making it difficult to secure loans, according to the president of Chiang Mai Tourism Business Association. As a possible solution, he even pitched putting the elephants up as collateral for loans.

Apparently a family that works together, stays together. But a couple who have been taking their two young children with them when they deliver illicit drugs to customers, have been arrested by police in Samut Prakan.

Police were waiting in Bang Chak sub-district, stopped their car for a search and found 30,000 methamphetamine tablets and 49 grams of ketamine concealed in the car’s glove box… well, hardly concealed.They also found two children, aged 11 and 4, believed to be the suspects’ son and daughter, in the backseat of the car.

Police later searched the couple’s house where they found another 1,000 methamphetamine pills. The couple have been charged with possessing narcotics with intent to sell.

Following its reopening of borders to fully-vaccinated visitors last week, the Philippines immigration has reportedly denied entry to 15 Malaysians due to their vaccination status in Malaysia. Their passports are being held and they will be deported out of the Philippines today.

They passengers were forced to sleep on benches or the airport floor as they waited to be sent back to Malaysia. But those on the same flight from Kuala Lumpur who had been vaccinated in Singapore or the UK were allowed entry.

The immigration officers advised them that they needed to get vaccinated in another country with a World Health Organisation International Certificate of Vaccination.People wanting to travel to The Philippines at this time are recommended to check all the current arrival formalities at this time.