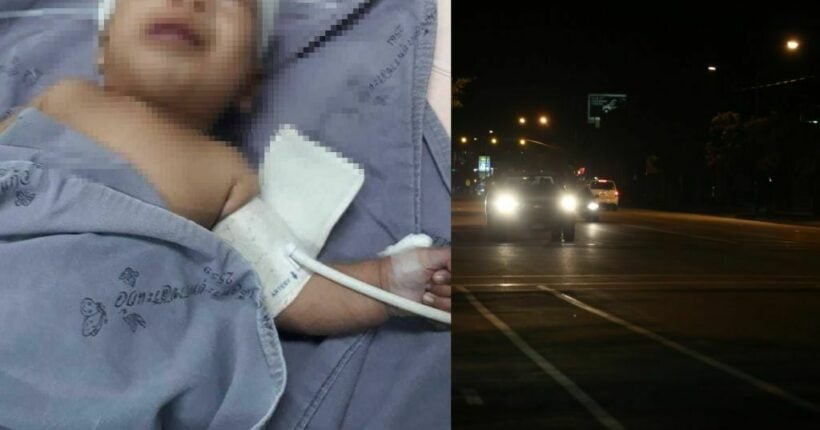 A four month old baby was found in the middle of a road in the eastern province Sa Kaeo, which borders Cambodia. Reports say the mother was drunk and accidentally dropped her baby while on a motorbike, but didn’t realise until she had driven home.

Locals found the baby lying in the middle of the Suwannasorn Road at around 9pm Sunday and sent the child to the hospital. Reports say the baby had a mild head injury. At around midnight, the mother contacted emergency responders. Thai media says the woman admitted to being intoxicated and was somehow driving a motorbike while holding the baby. She says she didn’t realise the baby was gone until she was home.

Police officers are investigating to determine whether the mother dropped her baby intentionally. The baby is still in a hospital getting treatment for the wound on his head and some scratches on his body.

Many Thais on social media are sharing their opinions on this story, complaining about the recklessness of the mother.

Bike
Is the mother dit to take care of this baby? Or should child care protection services take over?

DoUKnowWhoIAm
2 hours ago, Thaiger said: somehow driving a motorbike while holding the baby. Like it was some kind of rare exception? It's pretty much the normal way of transport with a child here.
sawadeeken
So sad to read about something like this....

palooka
Police officers are investigating to determine whether the mother dropped her baby intentionally. Sadly that is all they are likely to do, not intentional, no crime.