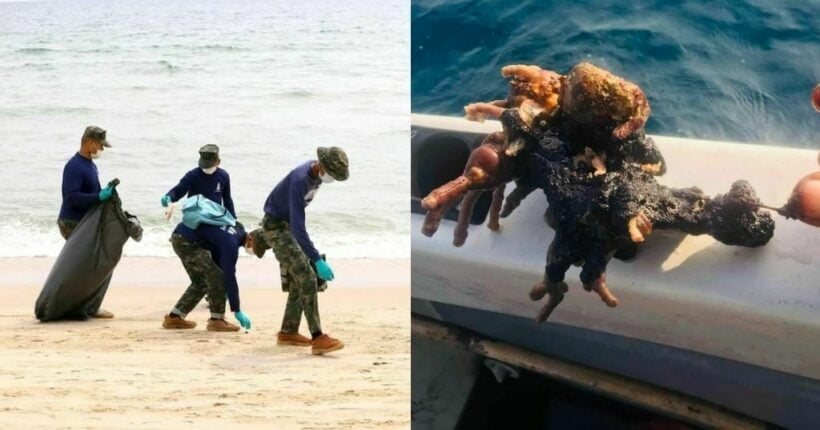 Following the second oil leak in Rayong, not only was leaked crude oil still on Mae Ramphueng Beach, but a Thai tourist says water reeked of oil and his body was covered in oily stains after a swim. Another local shared a picture of what looks like a coral-covered with a black strain. Locals say they are worried about the effects of the leaking oil on the natural resources and economy and wanted authorities to deal with the problem immediately.

Pathom Chumyen, the tourist who visited Mae Ramphueng Beach yesterday, told Thai media that he knew about the oil leak, but decided to travel there because Rayong authorities confirmed that there was no more oil in the ocean or on the beach. But when he went for a swim, the smell was so bad, he had to get out. He then noticed his body was covered with oily stains. He told Thai media that he is worried about the effects on natural resources and wanted the authorities to get rid of them as soon as possible.

Yesterday, Thai media visited the beach and reported that Thai authorities and staff from the Star Petroleum Refining Public Company were cleaning the oil spill on the beach. Sticky black oil spread over a kilometre along the beach, and officers picked up the blobs of oil and put them into plastic bags.

In an interview with a local vendor at the beach, she said that she is worried about business following the oil leak. If tourists can’t swim and enjoy the beach, she says, who will want to visit Rayong? She added that she hopes all relevant officers would fix the problem as soon as possible.

Stardust
10 minutes ago, Thaiger said: Following the second oil leak in Rayong, not only was leaked crude oil still on Mae Ramphueng Beach, but a Thai tourist says water reeked of oil and his body was covered in oily stains…

palooka
28 minutes ago, Stardust said: Thai tourist says water reeked of oil and his body was covered in oily stains after a swim. On the good side, no nasties like sea lice, jellyfish or hungry predators.

DoUKnowWhoIAm
38 minutes ago, Stardust said: And in a another article we could read that a tourist could face up to 10 years prison because of a pic with corals. And the tourist who got covered in oil after swimming will…
Jason
The cost of this clean up needs to be levelled at the company who caused it!!
DWiener
For once the walking street in Pattaya isn't the slimiest part of town