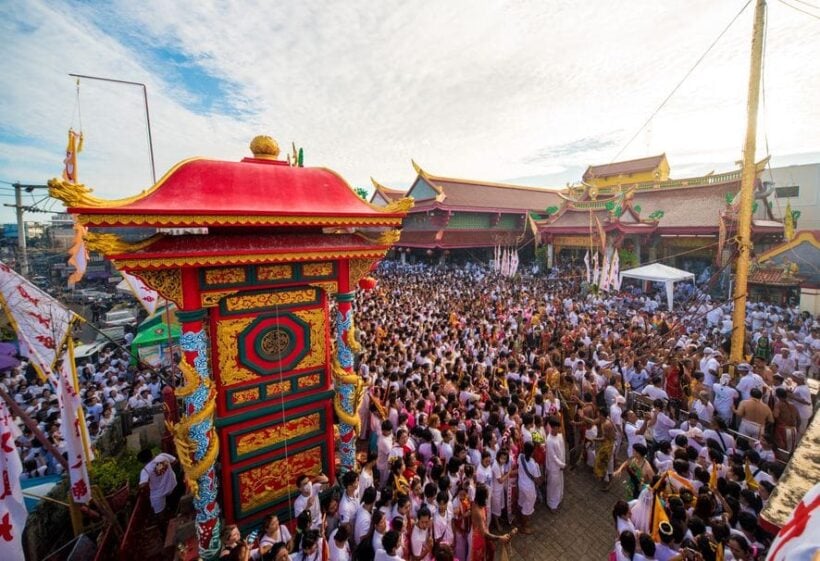 The annual Vegetarian Festival is back and promises to be a big year for the annual nine day celebrations starting next Monday.

Some of the rituals are based around self-mutilation and daring acts of fire walking. A lot of the processions and ceremonies can be quite scary, especially for the young or squeamish. There will be lots of noise, lots of people and people going into trances before undergoing different levels of voluntary mutilation. These days there are medical staff behind the scenes should anyone drop out of trance and need medical help, a luxury not afforded the devotees in the past.

The Vegetarian Festival is becoming a popular tourist attraction but it’s also observed by younger locals and some tourists as well. Observers and participants avoid eating meat, seafood, poultry or dairy products during the period of the festival. The belief is that observers will have better health, purer mind, and gain merits from taking vegetarian foods.

You will see many restaurants with yellow flag, indicating that they provide pure, vegetarian food. This is your chance to try delicious new food as the streets will be filled with food stalls serving up vegetarian dishes.

The annual festival kicks off with religious rituals which are held at the main Chinese shrines on the island – Seng Ko Teng Thiao. The Lantern Pole is supposed to attract the 36,000 gods of the Chinese pantheon.

All shrines will raise their poles between 3-5.45pm, except for Sheng Leng Tong (which holds their ceremony earlier).

The opening night ritual of the Koteng lantern pole raising will be held at the Juitui Tao Bo Keng Shrine, the ancient Chinese shrine in Old Phuket Town. Apart from Juitui Tao Bo Keng Shrine, approximately 30 shrines around the island will conduct the annual ceremony including Bang Niew Shrine, Samkong Shrine, and Kathu Shrine. After the ritual, the Masong (people who invite the spirits of Chinese gods to possess their bodies) will be parading around. The daily processions are something you will unlikely see anywhere else in the world, at least not as intense as the Phuket parades – noise, music, fireworks, smoke, masongs in trances, body piercings and mutilations. The parades are a complete assault on your senses. Whilst there are many local children involved in the event, the western tourist, and especially kids, may find some of the activities quite overwhelming.

(Times listed in the 24 hour clock) 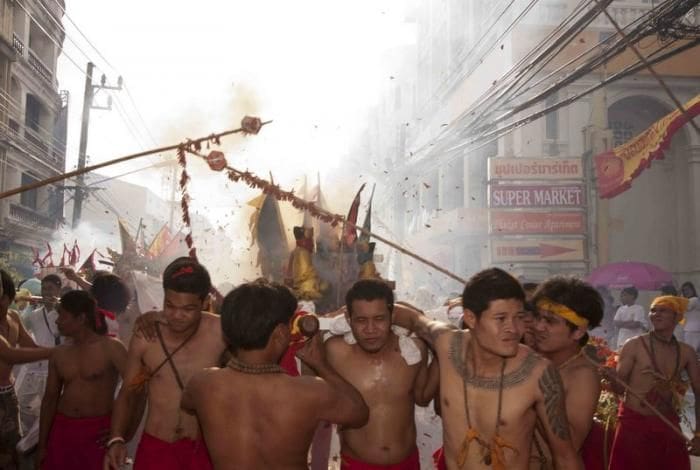 Final Day of the Festival

Then, grab your ear plugs and don’t wear anything flammable – the last part is just NUTS! After 9pm all shrines join together in a mega street parade in Phuket Town. This is the Nine Emperor Gods Farewell.

Each shrine involved in the festival has their own Emperor God. The procession accompanies each group to Saphan Hin, from where the gods will depart Phuket (no Immigration queues!).

This three hour cacophony of noise, smoke and fireworks borders on dangerous so should be attended with an escape route in mind, safety goggles (really) and patience. The crowds are massive and YOU are part of the parade – there are spectator stands.

Then, on Thursday, October 18, each shrine will hold their own Lantern Pole lowering ceremony which usually run from 3-5pm. 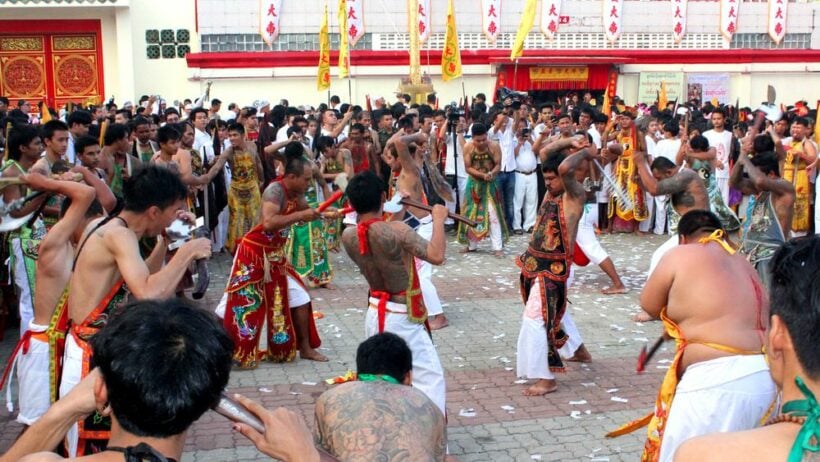