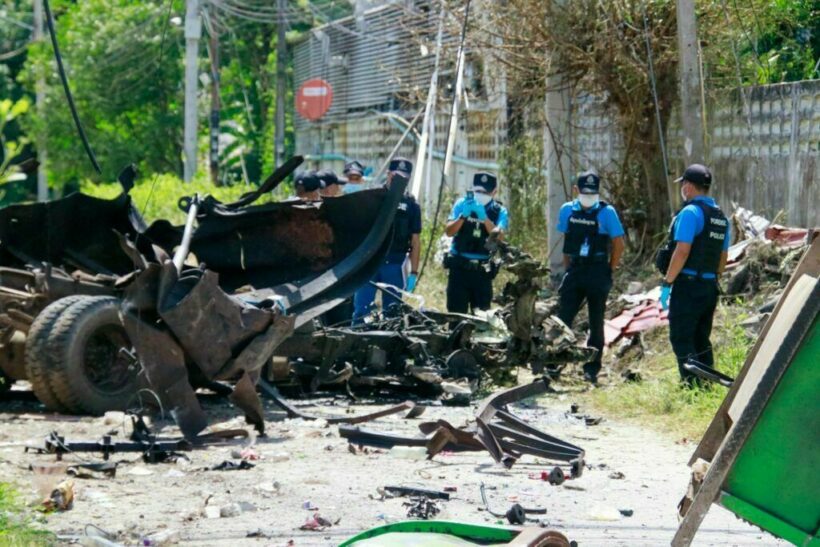 Another round of “peace talks” between the Thai government and rebel groups in Thailand’s Deep South was wrapped up yesterday at a hotel in Kuala Lumpur, Malaysia. The Barisan Revolusi Nasional (BRN) – one of the most active and well-established insurgent groups in the south – is considering Thailand’s request for a three month ceasefire for the duration of Buddhist Lent.

The Thai government proposed a 108-day ceasefire between August 15 and November 30, inclusive of “Vassa” or Buddhist Lent, which began on July 14 and will end on October 10. The Thai side proposed the idea after the BRN and Thai government successfully observed a 40-day ceasefire during the Islamic holiday of Ramadan earlier this year.

Yala, Narathiwat, Pattani, and parts of Songkhla province – covering the area of the historical ‘Patani’ kingdom – have been plagued by intermittent violent attacks between government forces and “rebels” or “insurgent groups” since the insurgency took off again in 2004. However, the roots of the South Thailand insurgency go much further back in history.

Just hours before the “peace talks” ended yesterday, two village defense volunteers in the Mae Khen district of Pattani were injured by a roadside bomb blast. The injuries are not life threatening, said police.

No rebel groups have claimed responsibility for yesterday’s explosion, but insurgents are suspected to be behind the attack, given that the targets were defense volunteers who were protecting teachers and students in the area.

Historically, insurgents have taken out strategic attacks on representatives of the Thai state – such as teachers, soldiers, Buddhist monks, and police officers – as an attempt to express their dissatisfaction with, or have their demands met, by the Thai government.

“Six defense volunteers were riding on three motorcycles to protect teachers and students in the area … when the attackers triggered the bomb rigged to a cooking gas cylinder, injuring two of them,” said Chief of Police in Pattani Province Maj. Gen. Narin Busama.

During Ramadan, between April 3 and May 14 this year, the BRN and the Thai government observed a successful 40-day ceasefire in which both sides kept their promises of a violence-free religious holiday.

However, the Patani United Liberation Front (PULO) – another major historical insurgent group – did not observe the Ramadan ceasefire. PULO carried out twin roadside bombings in southern Thailand during Ramadan which killed a villager and injured three police officers. PULO claimed responsibility for the attack, citing the group’s exclusion from Kuala Lumpur peace talks as the reason behind it.

PULO said they were not invited to the most recent round of peace talks. Malaysia can only facilitate groups as agreed by the Thai government and PULO hasn’t yet approached the government, said facilitators.

The initiative has a ‘policy of inclusivity’ and PULO are welcome to request an invitation to the next round of peace talks from the Thai government, according to Chief Thai negotiator Gen. Wanlop Rugsanaoh.

The BRN did not agree to the Buddhist Lent ceasefire straight away and is still negotiating some aspects before reaching a final agreement. However, the idea of a ceasefire is certainly on the table. The BRN did not make a public comment about the peace talks or potential ceasefire but said they will hold a press conference today.

Last month, suspected insurgents hijacked a garbage truck, tied up four binmen on the side of the road, and placed a 50 kilogram bomb inside the vehicle. The armed men drove the ticking garbage truck to a police booth and detonated the bomb outside it, injuring one police officer.

Since violence resurfaced in 2004, more than 7,000 people have been killed and 13,500 more injured in violence in Thailand’s Deep South.

HiuMak
If only the words of these people can be trusted, they won't be called "Rebels"
brian60221
I'm sorry to say, this will not work. How do I know? Because the Muslims can't agree to a ceasefire even for their own special days.