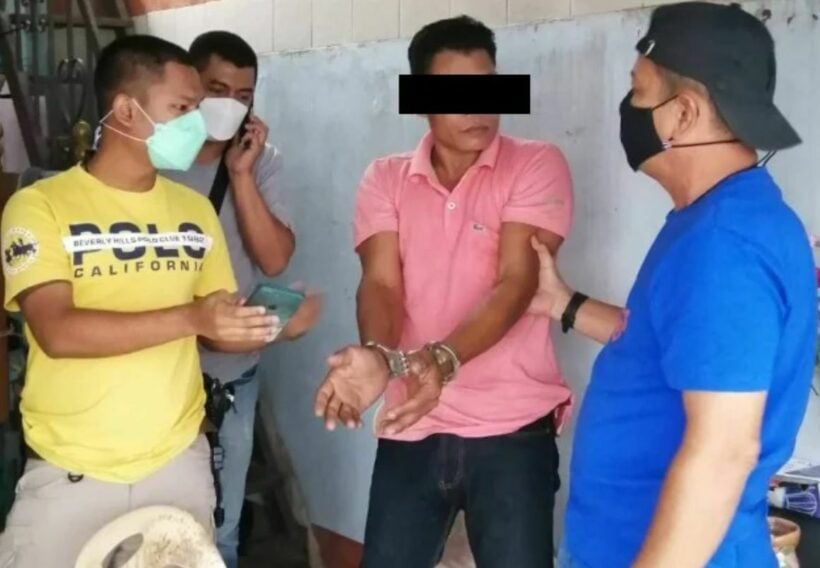 PHOTO: A Burmese man was arrested for rape and assault of a Thai woman. (via Phuket City Police)

A Burmese man accused of the assault and rape of a Thai woman he had hired as a maid has been arrested by Phuket City Police. The 42 year old man lives near the fishing port area in Rassada and was taken into custody after the Phuket Provincial Court issued an arrest warrant yesterday.

The 47 year old woman from Sa Kaeo was hired on August 27 as a housekeeper but when she arrived to the Burmese man’s house he raped her and took her captive all night. She reported the incident to the police the next day but says they took no action. Yesterday she presented her police report and the Phuket Provincial Hospital medical report of her medical examination to reporters who interviewed her before the police executed the arrest warrant.

She said her friend took her to the Phuket City Police Station after the incident but was only given a form for a doctor to fill out at her medical examination. She had to take herself to the hospital. The woman posted about it on a famous Facebook page which sparked outrage about the police inaction. An officer responded in a public comment saying an investigation into the rape was ongoing and evidence had been being gathered in order to get the arrest warrant for the Burmese man.

The Burmese man, who works as a migrant labour broker that matches fishing boats with workers in Phuket, faces rape charges that carry a fine of 8,000 to 40,000 baht and 4 to 20 years in prison.

The woman recounted the trauma, saying she was referred by a friend to the man who said he needed someone to do laundry. He welcomed her with a meal and chatted with her about work. But after eating, the woman said he attacked, kicking and punching her and told her that he had paid off the police so they wouldn’t help her.

She said from 9 pm to 4 am she was beaten repeatedly and raped, saying at one point he taped her mouth shut, put a plastic bag over her head, and threatened to kill her. According to the woman, the Burmese man fell asleep but she was locked in and had to wait until after 9 am when his associates woke him and brought him to work, accidentally leaving the door unlocked.

vlad
Sounds a bit far fetched to me. Firstly how can a Burmese man employ a Thai when he could have brought a migrant down in his role as a broker would have been cheaper, second the old plastic bag over…

Poolie
I think that anyone who takes a quotation from the Government, whichever one, literally, deserves the disappointment that invariably follows.  And follow it inevitably does.
HolyCowCm
25 minutes ago, AdvocatusDiaboli said: Allegedly! But back to original article,  She reported the incident to the police the next day but says they took no action. … But after eating, the woman said he attacked, kicking and punching her…
HolyCowCm
Article quote: The Burmese man, who works as a migrant labour broker that matches fishing boats with workers in Phuket, faces rape charges that carry a fine of 8,000 to 40,000 baht and 4 to 20 years in prison.…

Guest1
"A Burmese man accused of the assault and rape of a Thai woman he had hired as a maid" First I thought, what's wrong here? Did someone confuse the nationalities of the man and the woman.  But then I thought,…