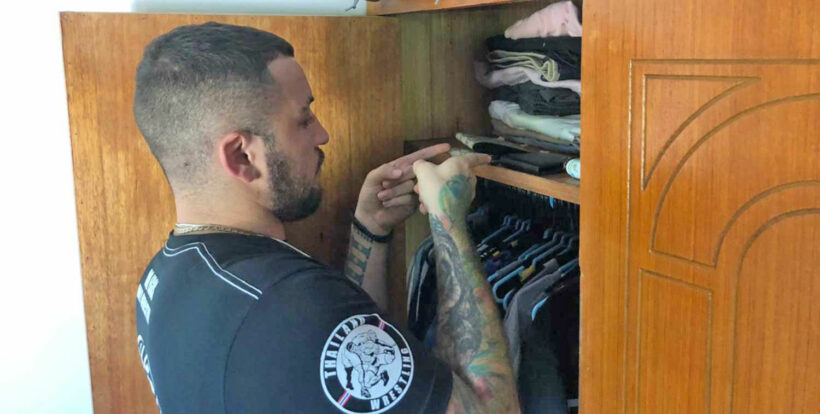 Christopher Braman  takes Gucci wallets from a closet after police took him to his rented room to look for the reportedly stolen items - Achadtaya Chuenniran, Bangkok Post

An American man has been arrested for theft after allegedly stealing three designer wallets from a shop at Phuket’s Central Floresta shopping mall. Twenty-one year old Christopher Braman was arrested at the shopping centre in tambon Ratsada on charges of theft and overstaying his visa, police said yesterday.

After the arrest, police took Braman him to his rented room in tambon Chalong, where they found three Gucci wallets.

Kanthima Niyakit, 37, manager of the Gucci shop at Central Phuket Floresta, had earlier filed a complaint with accusing a male foreigner of stealing three Gucci wallets from her shop on Wednesday night. The stolen items were a brown wallet, priced at 15,500 baht, a tiger-print wallet worth 13,440 baht, and a bee-print wallet valued at 14,100 baht.

Police examined CCTV footage at the shop and tracked down the suspect, who was caught while walking at the mall on Thursday afternoon.