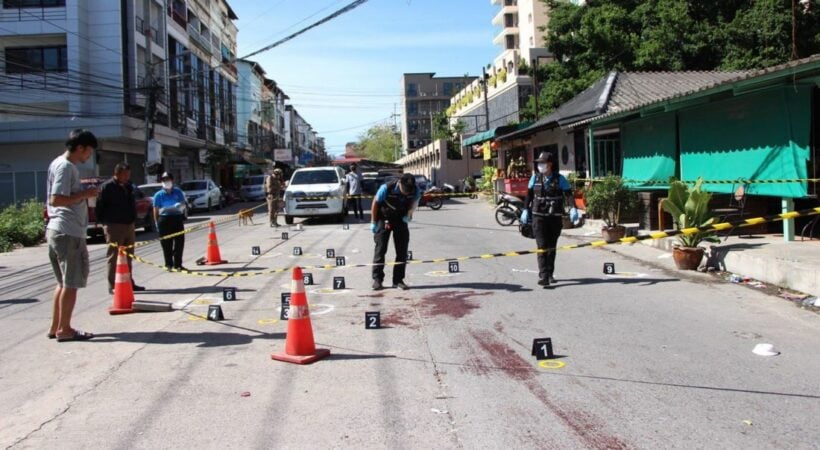 Two men have sustained serious injuries following a shoot-out at a Pattaya nightclub early this morning.

It’s understood trouble broke out after an argument between nightclub goers and security guards stationed in front of the club.

Captain Kanoknan Suksri of the Pattaya City Police was notified of the incident, which took place at the Teng See nightclub in Nong Pru, around 6.00am this morning.

Police recovered 8 cartridges at the scene of the incident, where blood was clearly visible on the ground.

The injured men have been named as Anuwat Suksamran and Chatchai Srisen, both aged 37. The Pattaya News reports that the men sustained serious injuries caused by both gunshots and stab wounds.

A police investigation is ongoing in order to get more information and identify additional suspects.

Saewana restaurant was raided at around 11pm last night by officers from Pattaya and the Banglamung district station. Alcohol was served in glasses and the bottles were hidden, police say.

Pattaya News says all 20 people at the restaurant were arrested, including the owner. They face charges for allegedly violating the provincial disease control order. Those who violate the Emergency Decree could face a hefty fine or even imprisonment.

A police officer who spoke to a Pattaya News reporter said that there is a zero-tolerance policy for alcohol consumption at restaurants as the policy has been made clear to the public.