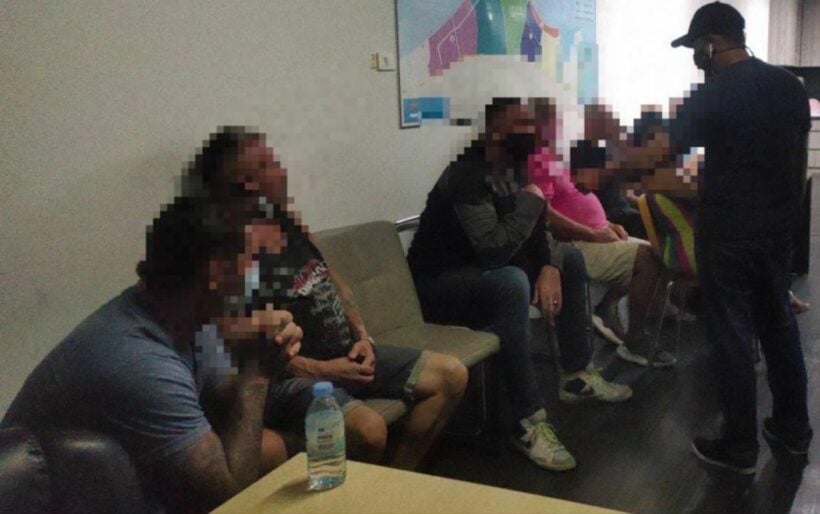 15 people were arrested at a restaurant in Bang Lamung, accused of drinking illegally in violation of Covid-19 restrictions in Pattaya. Last night, Pattaya City Police raided an unnamed restaurant in Jomtien that was suspected of selling alcohol.

Officers arrived at the restaurant early in the evening to discover 9 foreigners and 5 Thai nationals plus the person running the restaurant, though it was not specified if they were the owner or manager. The police arrested the patrons both Thai and expat for violating both national and provincial orders against public drinking.

Police reported that they came to inspect the restaurant after local residents of the area complained that foreigners were secretly gathering with Thai people to drink alcohol in this restaurant on Soi Jomtien 7 in Nong Prue, Bang Lamung.

The group caught drinking was reportedly not wearing masks or social distancing as well. All 15 people at the restaurant were taken into custody and brought to the Pattaya City Police Station to face charges.

Restaurants serving alcoholic beverages to customers and people consuming alcohol in groups violates the Chon Buri Disease Control order as well as national orders from the Centre for Covid-19 Situation Administration which have closed all bars and entertainment venues since April 10 and prohibited restaurants from selling alcohol.

Punishment for violations of these orders include fines of up to 40,000 baht and up to 2 years in prison, though previous cases have seen much lighter sentencing with violators generally not receiving jail time and facing minimal fines.

Critics of these harsh crackdowns have been quick to point out that, while local and tourism economies have suffered endlessly at the hands of these restrictions, the vast majority of Covid-19 infections, even in popular tourist places like Pattaya and Phuket, the site of another crackdown this week, have come from work camps, construction sites, factories, and other industrial locations.

Stonker
Just now, AlexPTY said: When I lived in Pattaya, I am pretty sure numbers were close to 200k and it was according to Chonburi immigration  But is that retirees / marrieds / working / snowbirds / long-term tourists / foreigners…

AlexPTY
2 minutes ago, Stonker said: But is that retirees / marrieds / working / snowbirds / long-term tourists / foreigners / farangs / Chinese / Taiwanese / etc, etc? Who knows? I don't think it matters, as they spend money.…
Stonker
5 minutes ago, AlexPTY said: I don't think it matters, as they spend money. Most of the tourists money in Chonburi goes to bars, girls and other entertainment which don't pay taxes  Well, I think it probably matters in terms…
DiJoDavO
If all these articles are seen by people abroad, I guess they don't even need to bother opening the airports and scheduling flights anymore. They are doing their best to show this country from the worst sides possible.
Cathat
And they are considering opening up to international tourism next month.