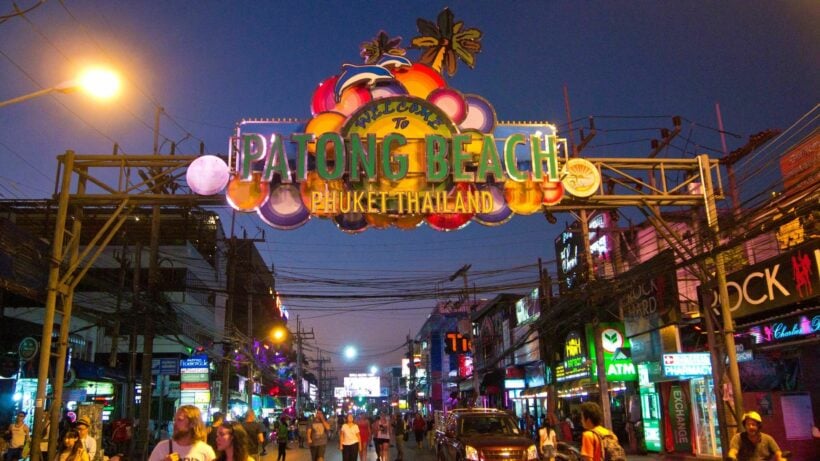 FILE PHOTO: After a month looking the other way, police are raiding bars selling alcohol in Patong.

While it’s been illegal for bars to open in Thailand and the selling or consumption of alcohol in public is forbidden, police have been looking the other way as patrons sneak beers in bars in Patong, the famous entertainment and nightlife district in Phuket. But after over a month of this occurring under the radar, police have begun raiding and shutting down venues that have been bypassing the provincial order that bans the sale of alcohol.

Bars on the famous Bangla Road have been selling alcohol to customers, many of whom are part of the Phuket Sandbox which has weathered criticism for reopening the province without any sort of nightlife to attract international tourists. But now the Phuket Provincial Police have been instructed to supervise and inspect areas to make sure that bars are not selling alcohol to prevent the spread of Covid-19.

The President of the Patong Entertainment Business Association had recently released a harsh criticism urging bars to open semi-illegally as restaurants since the government has failed to aid them in any way. In his statement, he mentioned that it was common knowledge that alcohol is still being served secretly.

The police say that they just learned in the news that secret alcohol sales and consumption are occurring right under their nose. They claim they were unaware that bars were reopened in Phuket and that tourists were enjoying beers.

Now that the police say they know about the practice, they raided the Sweetie Bar on Bangla Road, the hub of Patong, just after 10 pm Monday night with a team of six police officers. After seeing alcohol for sale they charged the owner with violating the Phuket Provincial Order that banned distributing alcohol and closed nightlife venues.

Then the next night, police claimed to learn again from the news that the Twenty One Bar on Nanai Road and Harry’s Restaurant was also doing the same and five police officers raided that bar at 9:45 pm and charged them with the same infractions. Interestingly, the bars were only charged with selling alcohol and not for being open in violation of Covid-19 safety laws which closed all bars and entertainment venues since April.

Police say they are now increasing inspections and enforcing rules strictly to prevent anybody breaking the communicable disease safety measures and are calling on anybody who observes bars selling alcohol to call the National Police hotline.

Guest1
4 minutes ago, AdvocatusDiaboli said: Is SMART an acronym that really is not in the same category as intelligent? Or maybe it means cheeky 🤣🤣🤣 At least, it is not one of this, here: Specific, Measurable, Achievable, Realistic, Timely.

AdvocatusDiaboli
2 minutes ago, Guest1 said: Specific, Measurable, Achievable, Realistic, Timely. Yes …. Allegedly that’s it …. Specific ….. is for the type of brown envelope  Measurable …. Is for the amount inside the brown envelope  Achievable …. How many brown…
Stonker
3 hours ago, Guest1 said: On top: It is low season. Which is very wet these days! It was a genuine question 😂 - I just can't understand why anyone would come here for a holiday. I'm trying hard to…

Lowseasonlover
5 minutes ago, Stonker said: It was a genuine question 😂 - I just can't understand why anyone would come here for a holiday. I'm trying hard to come up with any comparison with something that would be equally disappointing,…
Stonker
56 minutes ago, Lowseasonlover said: Ive just said to my wife, you wouldn't want to be here on holiday right now the weather is errrrrrrr, not good 3 days none stop raining Exactly - living 'yes', even though as usual…