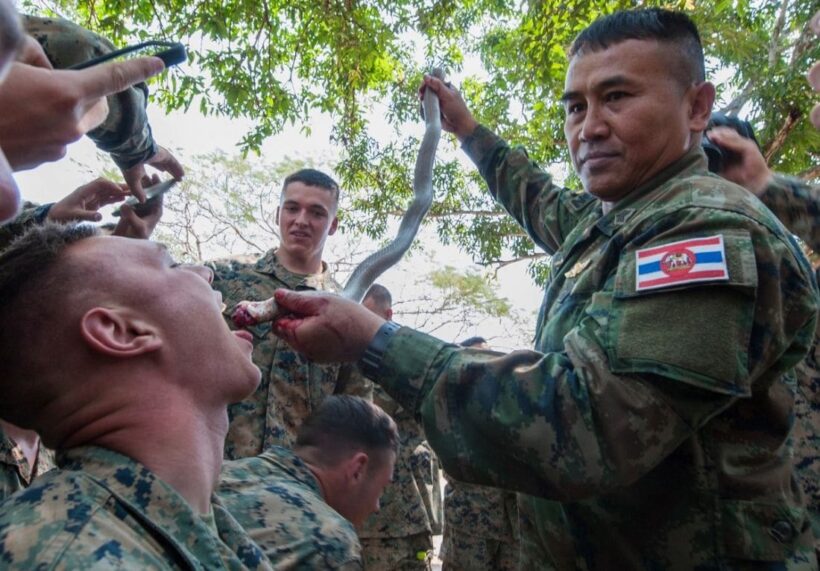 Thailand and US military forces have joined in the opening ceremony for the annual Cobra Gold military exercise. Cobra Gold is the largest biggest military exercise of its kind in the Asia-Pacific region with 29 nations taking part as participants or observers.

US Marines and other international troops joined in the annual event’s tradition of drinking blood from decapitated cobras. The bizarre ritual is thought to contain health benefits for humans brave enough to consume it (no studies are cited to support the claims but who’s going to argue with a blood-stained guy with a gun!?!)

Royal Thai Marine instructors showed the troops how drinking the blood from a cobra can help them stay alive if there is no drinkable water and can also provide essential nutrition.

But even some of the hardened US marines appear to have their eyes tightly shut as they get their taste of the cobra blood.

The ceremony was attended by Thai chief of defence forces General Pornpipat Benyasri and the commander of the US Army First Corps, Lieutenant General Gary J Volesky, representing the US Indo-Pacific Command.

Seven other nations are active participants: Singapore, Japan, Malaysia, China, India, Indonesia and South Korea. The US contingent includes more than 6,800 US troops.

Peter Haymond, the acting head of the US diplomatic mission in Thailand, says that the aim of the exercise, first held in 1982, is to strengthen cooperation and inter-operability.