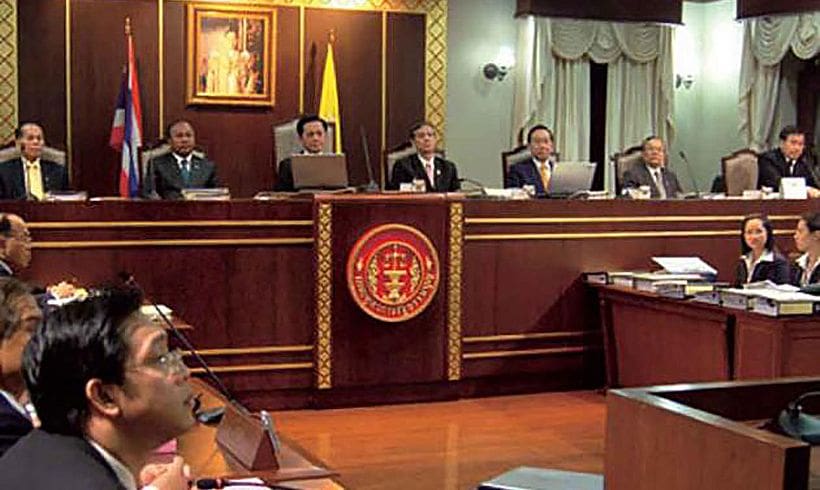 Thailand’s Constitutional Court has voted unanimously to accept the Election Commission’s ruling that the Thai Raksa Chart party be disbanded over its nomination of Princess Ubolratana as its prime ministerial candidate last Friday.

The party will be given seven days to present its defence in writing before the Court deliberates on the party’s future. Meanwhile electioneering is continuing for the March 24 poll with nominated MPs for the Thai Raksa Chart party in political limbo awaiting the outcome of the hearing.

An informed court source told Thai PBS that the Court members spent about one hour deliberating the case and agreed unanimously to accept it for consideration.

The court has scheduled the first hearing of the case on February 27 at 1.30 pm.

Shortly before the court session yesterday, Mr. Ruangkrai Leekitwattana, a party list candidate for Thai Raksa Chart and its legal advisor, submitted a petition to the court challenging the legitimacy of the EC’s ruling.

Mr. Ruangkrai claimed that the EC by-passed legal procedures to rush its decision without holding an enquiry or providing the party with an opportunity to present its defence.

The EC decided, by unanimous vote on Tuesday night, to disband the party without waiting for any defense or discussions with the Thai Raksa Chart party membership.

Thai Raksa Chart party’s chief strategist Chaturon Chaisaeng says that the party’s key campaigners and strategists have agreed to suspend their electioneering activities until there is a ruling from the Constitutional Court. He insisted that the party’s executive committee had acted in good faith when they endorsed the nomination of the Princess.