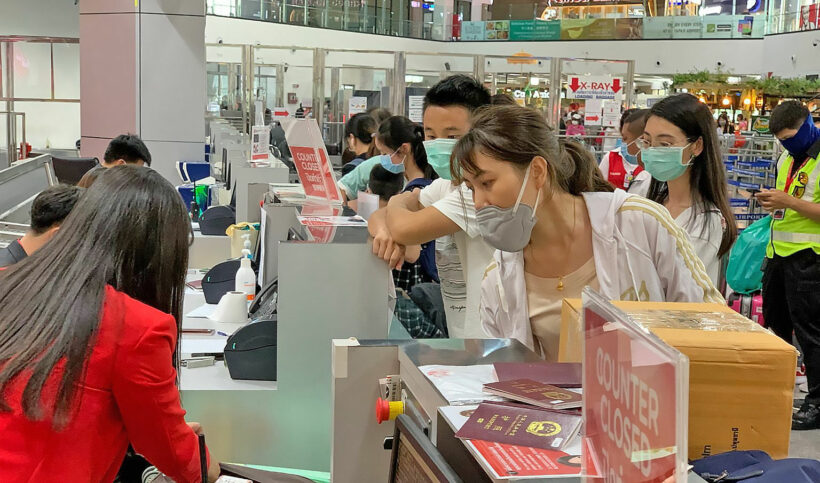 PHOTO: Chinese travellers at a Thai airport - The Pattaya News

The Thai baht, whose meteoric rise seemed unstoppable only weeks ago, has become Asia’s worst performing currency so far this year. It’s lost nearly half of its 2019 gains in just a month as fears over the Wuhan Coronavirus outbreak threaten Thai tourism.

The Year of the Rat has not been kind to Thailand. As late as December, there were reports the central bank was struggling to rein in the runaway baht, whose strength was harming tourism, exports and international relations. Now, the tables are turned and the Kingdom is scrambling for a Plan B to deal with lost tourism revenue, especially from China.

China’s ban on group tours to help contain the spreading virus that’s left 259 people dead as of today will inevitably take a toll on Thailand’s tourism industry, a key driver of growth.

The chief markets strategist of Krung Thai Bank says virus cases are affecting tourism. Health authorities have detected 19 cases, the most outside of China.

“Importers are also panicking, rushing to buy dollars for fear that the baht will weaken further.”

He added that the baht might reach 32.5 per dollar during this quarter.

The baht traded at 31.11 to the greenback on Thursday, the weakest in seven months. It reached a 7 year peak of 29.91 last year.

China is also the Kingdom’s second largest export market. “In the short term, a weak baht is good for exports, which should not contract,” according to the chairwoman of the Thai National Shippers’ Council.

But the virus is exacerbating problems for the economy, as exports have already  taken a hit from the US-China trade war, and investments were slowed by a delayed fiscal budget.

The head of capital markets research of Kasikornbank told Reuters the manufacturing sector will be affected next if the China shutdown extends beyond early February.

“”So the next shoe to fall is supply chain disruption,” he said. “China sneezes…Asia catches the economic flu.”