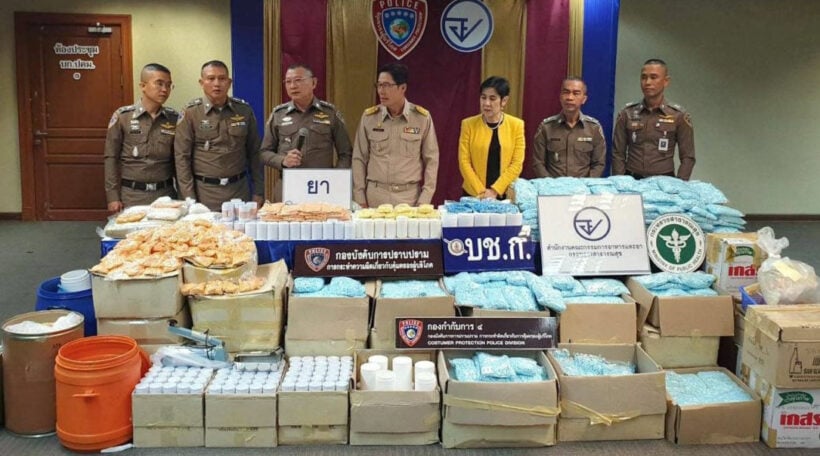 The Food and Drug Administration (FDA) is warning people about the use of unlicensed or fake treatments that could lead to serious or even fatal side effects.

This follows the seizure of 2 million unlicensed pills worth 5 million baht from a Bangkok medication manufacturer.

Announcing the illegal-medicine seizure, the FDA secretary-general Dr Tares Krassnairawiwong says that after his agency detected the use of unlicensed medication at a number of illegal clinics, it joined with the CPD to conduct an investigation resulting in the search of two target locations in Bangkok.

Officers confiscated a total of 2 million pills worth 5 million baht in Soi On Nut 67 of Prawet district. At this stage the types of drug are yet to be confirmed and either did not carry any drug formula licence number on the label or had no label at all.

CPD deputy commander Pol Colonel Winai Wongbuppha said police had already been notified of a suspect linked to the limited partnership company, and were also investigating the pharmacist at the company’s pharmacy store to see if the individual in question should also be subjected to a Pharmacy Council disciplinary probe.

“Anyone who sees any pharmacy shop or medical facility that sells unlicensed medicine, or sells medication without a pharmacist on duty, can alert the FDA hotline 1556.”

FDA deputy secretary-general Dr Supattra Boonserm says most of the confiscated medicine, which should have been under the care of medical professionals, carried no drug formula licence numbers, hence if people used these treatments, which may turn out to be fake or of poor quality, they could develop serious or even fatal side effects.

“The selling of unlicensed medicine is punishable with a maximum imprisonment of three years and/or a maximum fine of 5,000 baht.”

Thanathorn says other MPs now in the firing line, including from Phalang Pracharat