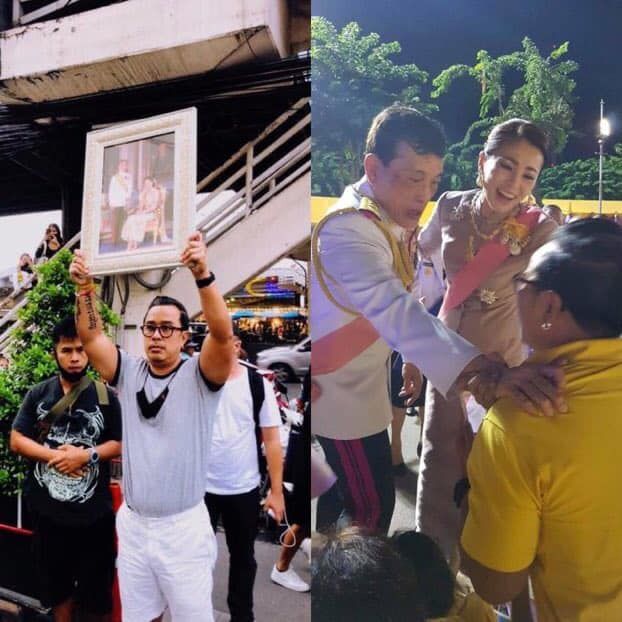 It was a rare moment that has shocked royal supporters, in the best way possible, as the Royal couple turned on the charm after a merit-making ceremony last night.

His Majesty King Maha Vajiralongkorn and Queen Suthida stepped away from the traditional royal protocol after last night’s official ceremony, stopping briefly to single out a man who was with a small yellow-clad crowd who had assembled outside the Grand Palace. Their Majesties presided over a merit-making ceremony on Friday night for the public holiday in commemoration of King Chulalongkorn

Well wishers were shocked when both the Thai King and Queen appeared to recognise a man who made headlines in Thai media last week when he held up a portrait of HM’s parents, the late King Bhumibol Adulyadej and the Queen Mother Sirikit, in a show of defiance in the middle of an anti-government protest. His Majesty went further and clasped the hands of seated well-wishers, a first for the Thai monarch who was crowned officially on May 4 last year and spends much of his time living in Bavaria, Germany.

The man held the portrait high in the air, held his ground and berated the protesters. He said at the time that he wanted to show solidarity for royal supporters in reaction to the anti-government protests that had been rising in support since July.

HM the King approached and thanked the man, Thitiwat Tanagaroon, for his actions as the rest of the crowd yelled “Long live Their Majesties” (in Thai).

Posting on his Facebook page, Thitiwat recalled the few moments he is unlikely to forget when HM the Queen recognised him from media exposure of the anti-government protest event, and turned to explain to the King that he was the same man who had held up the royal portrait outside the Central Pinklao shopping centre.

Thai media report that the Queen said… “I grant you my support. Thank you very much.”

His Majesty then added, “Very brave. So good. Thank you.”

His Majesty then placed his hand on the man’s shoulder. Thitiwat responded “Long live the King. This is a very great honour for me.”

Thitiwat later posted on his Facebook page… “I am fainting. Their Majesties recognised me. This is the best moment in my life,”

He posted the photo of the King touching his shoulder as the Queen looked on smiling. Overcome with the moment, Thitirat was consoled by the rest of the band of royal supporters.

The posts and video clips instantly went viral on social media last night. The hashtags #FightOnYourMajesty and #WeLoveThaiMonarchy were trending on Twitter last night, pushing aside the #PrayutGetOut and similar hashtags that had been trending over recent weeks.

Royalists have been coming out in staged shows of support to show support for the Thai monarchy and counter the growing support of the recent Thai protest movement. The anti-government protesters have included demands for reform to the role of the Head of State, but have made it clear they don’t want to “get rid of the King”, a common rhetoric of Thai royalists, but instead want to codify the role of the Thai monarch, with limits on the monarch’s power, in a new Thai constitution.

The ‘Royal rallies’. also growing in number, have been in response to the ongoing anti-government demonstrations around the country. 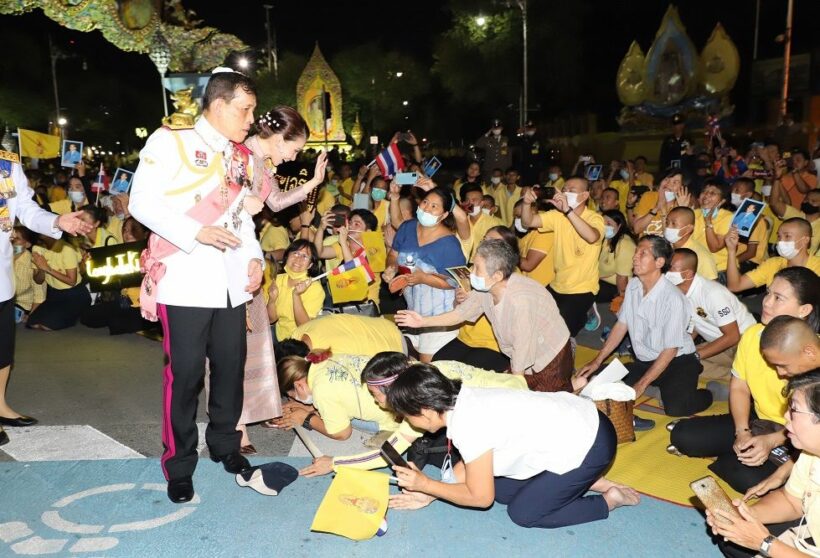