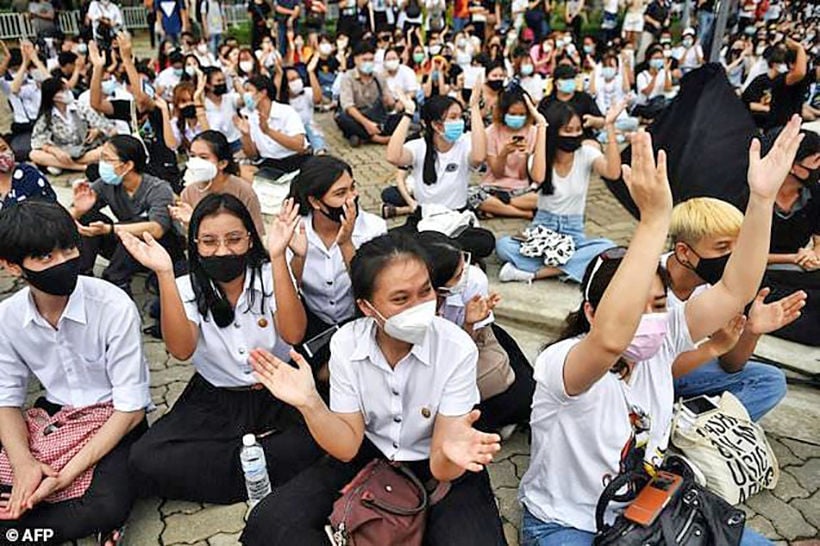 Student activists said today they were stalked by what they believed were plainclothes police officers at their residence overnight. Pro-democracy campaigner Panusaya Sithijirawattanakul, who is the spokesperson for the Student Union of Thailand, said on her Facebook that she saw several men loitering around her dormitory near Thammasat University’s Rangsit Campus, while another activist, Parit “Penguin” Chiwarak, reported that several men were seen in front of his residence. He says he believes they were standing by to arrest him. Police deny any involvement.

“I’ve been told that there are plainclothes police officers waiting in front of my dormitory,” Panusaya said. “They’re preparing to arrest me and Parit at 5am because he is angry.”

She told her supporters to remain resilient and keep pushing the agenda she introduced onstage at the Monday’s anti-government rally held inside the university. Thammasat University Student Union also issued a warning to students staying near her residence to stay inside, adding that “student security guards” were dispatched to the scene.

The arrests had not taken place as of publication time. The student union says the men they believed to be plainclothes officers left the area at around 2am, after the incident caught widespread attention on social media.

Regional police commander Ampon Buarubporn said he has no knowledge of the alleged operation. He says his force was not mobilised to the scene last night, except for several patrol officers, which he said was is normal routine.

“I checked with the local units and they said there was no order to arrest them. There were only patrol officers last night, which was part of the normal routine to keep the community safe.”

Ampon said no one has been charged so far for the Monday’s protest, though he added that investigators are gathering evidence for a possible prosecution.

Deputy PM Prawit Wongsuwan also denied knowledge of the rumoured arrests, and said the students were being overly imaginative.