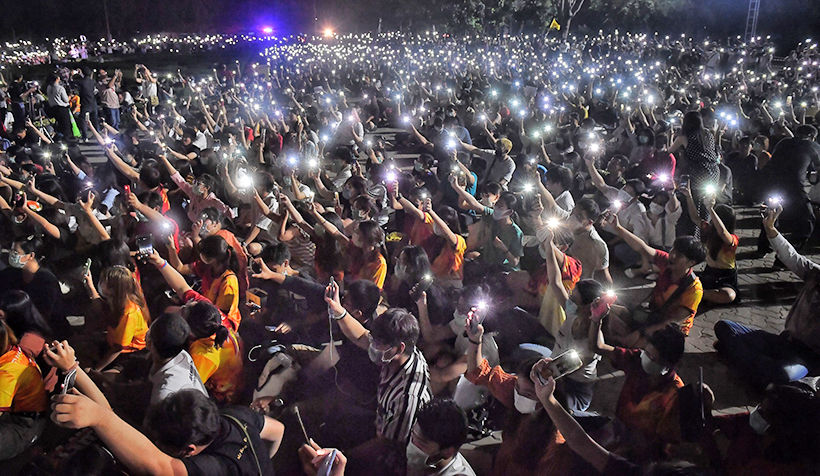 Monday night’s anti-government rally at Thammasat University  is said to have risked “offending the Monarchy”, sparking fears that it could trigger violent confrontations between royalists and their opponents. Comments made by protesters at the university’s campus in Pathum Thani may have violated Section 112 of the Criminal Code, also known as the lèse-majesté law. Students announced a set of 10 demands, including changes to the country’s highest institution, Section 112 and royal prerogatives.

PM Prayut Chan-o-cha on Tuesday said that the government has been monitoring the situation and admitted he’s worried about it. He declined to comment on the protesters’ demands. Thammasat University issued a statement distancing itself from the protest and apologised for the rally. The university said the organisers asked for permission to hold the rally to push for their 3 original demands: constitutional amendments, the dissolution of the House and an end to the intimidation of critics of the government.

But, the university said, during the rally the protesters “acted and spoke beyond permitted bounds”, particularly on issues which were “delicate and sensitive to the feelings of the public at large”. Their actions went beyond permitted limits and were “the personal responsibility of the protesters”, the statement continued, since the organisers had struck an agreement with police beforehand.

Police will take legal action against all involved, particularly those who are not students of the university. The university says it is willing to cooperate and ensure justice. For its students who acted improperly during the rally, Thammasat will itself take action, based on facts and in line with its regulations.

The university has also pledged to prevent a recurrence of Monday’s incidents, saying from now it will ban political activities on its premises that risk violating the law. Its deputy dean apologised yesterday for comments made during the rally. He said the organisers had “failed to adhere to the agenda agreed upon” when they sought and obtained permission for the demonstration.

On October 6, 1976, soldiers, police and far-right groups surrounded the Thammasat University campus in Tha Prachan and killed dozens of student activists who had gathered to oppose the return of Field Marshal Thanom Kittikachorn, who was overthrown and fled Thailand after an October 1973 uprising. 1 of the reasons cited by the authorities to quell that rally was that activists had allegedly insulted the Monarchy.

The chairman of the United Front for Democracy against Dictatorship, warned in a Facebook broadcast on yesterday that any demands that “cross the line” will lead to a confrontation with the movement that seeks to protect the Monarchy. He predicted this would end up in an incident similar to the 1976 tragedy.

He added that the protesters’ 3 original demands are legitimate and likely to succeed.

“But crossing the line will render the student movement illegitimate and in the end, they will achieve nothing.”