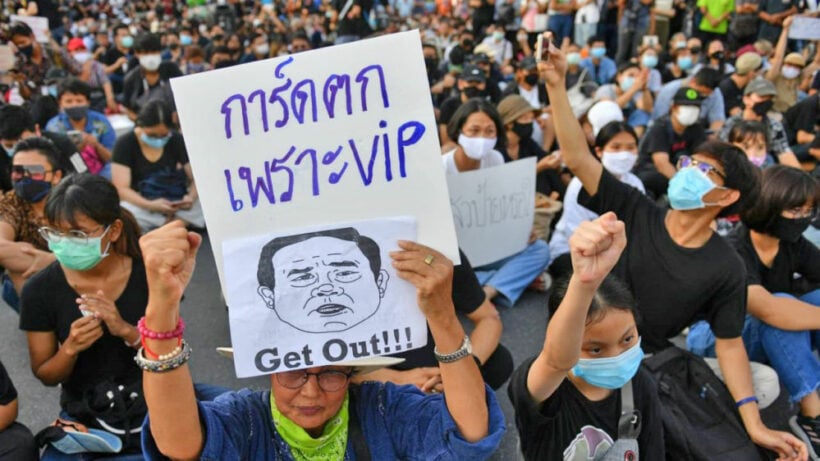 Authorities yesterday announced that 4 companies of Bangkok police will be deployed to maintain peace and order at the major pro-democracy rally planned for this afternoon at Democracy Monument. The Metropolitan Police Bureau has arranged for 4 companies, 600 officers in total, to be present at the venue. Traffic police will also be dispatched to facilitate movement in the area.

In addition, police from the 191 Patrol Unit will be deployed at all corners and intersections to monitor developments and prevent any “third party” from instigating any possible untoward incident, according to the deputy chief of the MBP. Pro-monarchy groups have become increasingly vocal in their disapproval of comments by a few student leaders about the royal institution. Authorities have expressed concern about the possibility of violence at a public event.

The Free Youth and Free People groups say they expect around 10,000 to attend the rally at Democracy Monument, from 3pm to 9pm. Among those planning to attend is Parit “Penguin” Chiwarak, a prominent student activist who was freed on bail yesterday after being arrested on multiple charges including sedition.

The US Embassy in Bangkok has sent an email to US citizens advising them to “plan ahead for the possibility of traffic and other potential disruptions” if they plan to visit the area.

“Although violence is not expected, even demonstrations intended to be peaceful can turn confrontational and escalate into violence. You should avoid areas of demonstrations, and exercise caution if in the vicinity of any large gatherings, protests or demonstrations.”

On July 18, thousands of demonstrators converged on Democracy Monument to call for the dissolution of the House and a rewrite of the Constitution. The gathering, organised by the Thailand Student Union and the Free Youth group, was the biggest of its kind since the end of most Covid-19 restrictions.