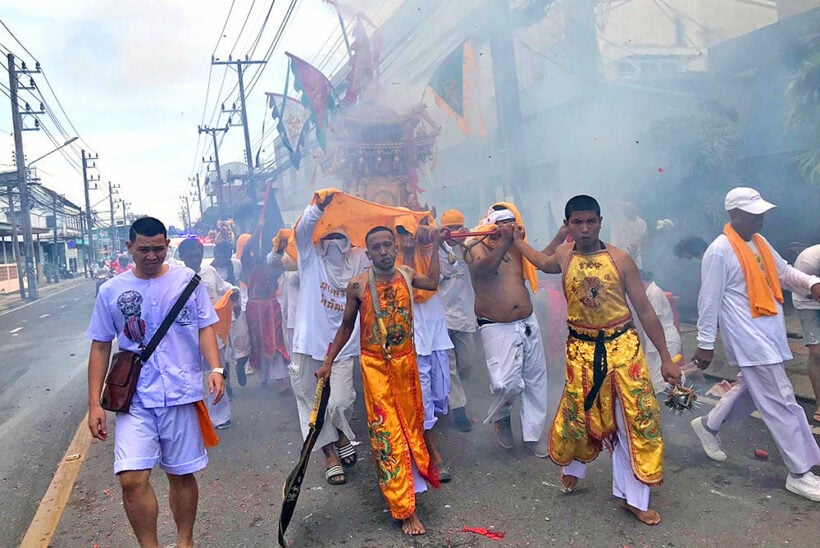 Today, the Sapam and Bangku Shrines started their Mah Song parade, also known as ‘Lew Geng’ around the the main city of Phuket, in Phuket Town on the island’s east coast. The parades in the annual vegetarian festival are are feature of the 10 day event and attract thousands of tourists to the island in increasing numbers every year. The traditions of the Phuket vegetarian festival are based on ancient Chinese traditions of appeasing the gods to rid the bad luck and invite prosperity for the next year.

Much of Phuket’s Thai population are ethnically Thai-Chinese following the days when Chinese traders plied the Malacca Strait when Phuket was an important tradition hub between the East and West.

The parades were filled with both male and female Mah Song who had pierced their cheeks earlier in the morning in elaborate, secretive ceremonies, using different types of items from smaller steel skewers and swords, up to large tools and machinery items.

It’s believed that the display of piercings, and the parades around the streets with fireworks, will eliminate unfortunate events from people who join the vegetarian festival.

Some of the items used in the piercing process are originals as spoken about in legend, including swords and traditional lances from the five precincts in China. But some of them are weapons that are not mentioned in the legend. Recently the items have been getting larger and more bizarre, thought to be more for the cameras and the tourists as ‘shock value’, and less about the original traditions.

The parades from Sapam and Bangku Shrines were heading to the Saphan Hin Cape in order to collect the holy joss stick and candle smoke and bring it back to their shrines.

Along the parade, there were thousands of locals as well as tourists who were mainly dressed in white and gathered to observe and welcome the noisy parade, even though it was raining at the time when the parade was passing the intersection at the Standard Charter Bank Building in Phuket Town.

The crowd remained on the sidewalk and observed the parade until the last row. If you get too close to the parade you are in real danger of ending up with a firecracker at your feet or being overwhelmed by the smoke.

Many Phuket Town locals – residents and shops, living along the parade route, set up a worship table and lit up fire crackers in front of their houses to encourage the Mah Songs to stop by and bless the family.

The route of the parades started from the entrances of the shrines, moved along Thepkasattri Road and through Phuket old town before reaching Saphan Hin park. Tomorrow, the parade will start from the Samkong Shrine and also tour around the city. 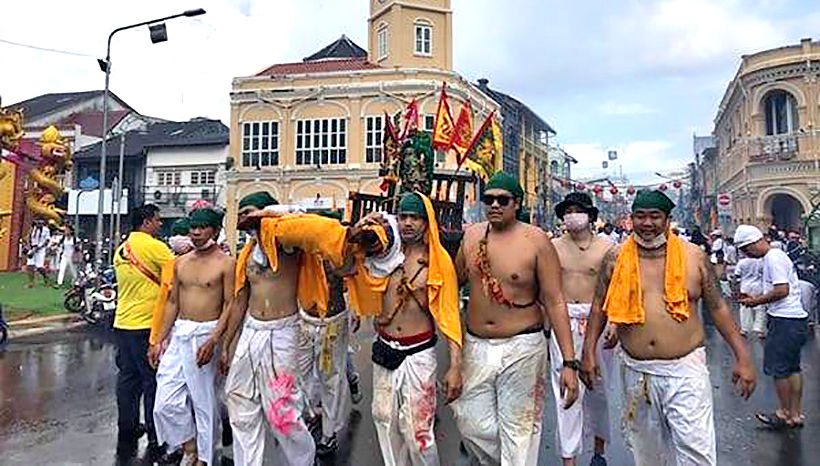 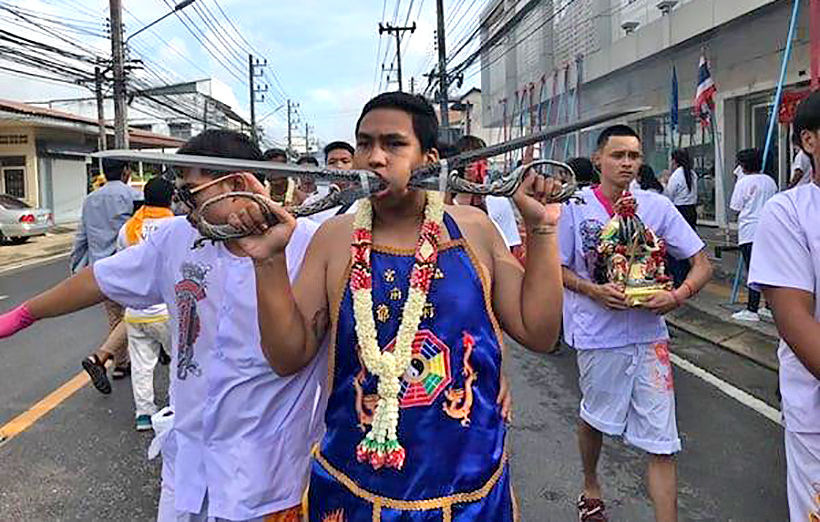 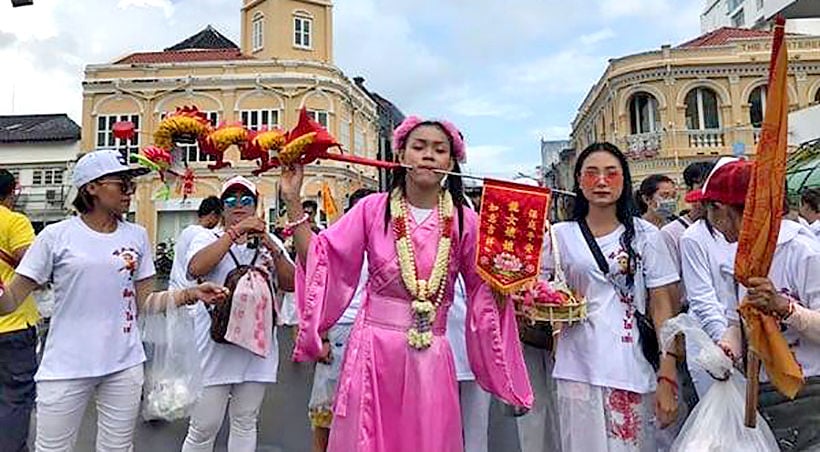 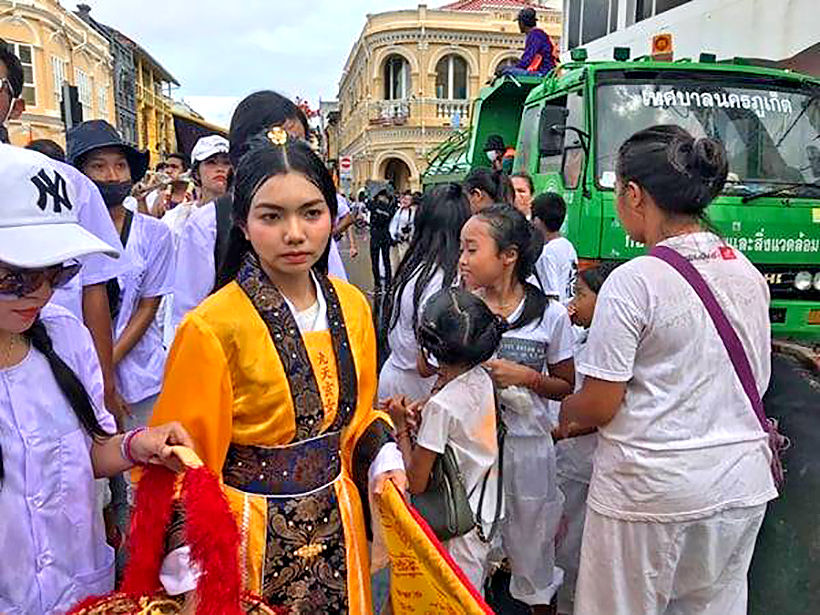 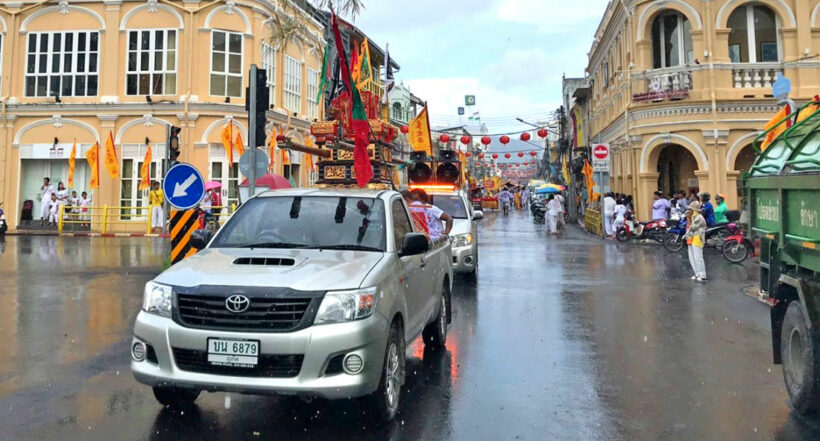 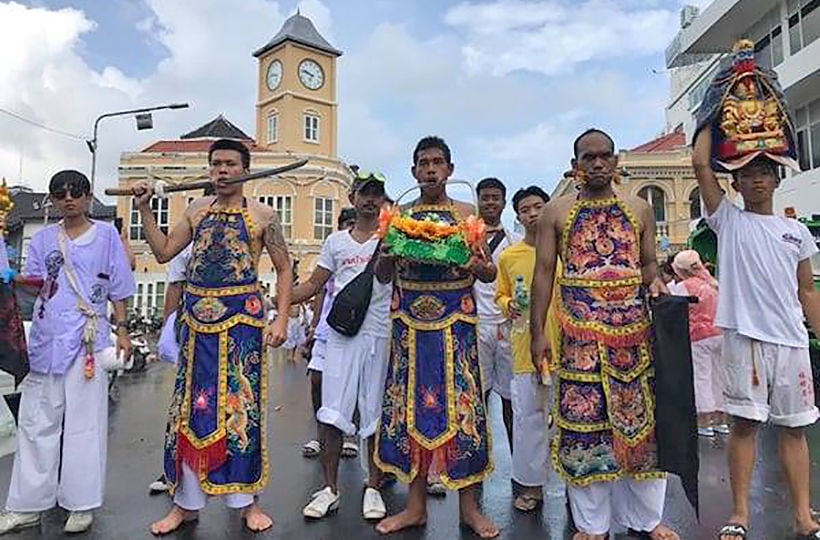 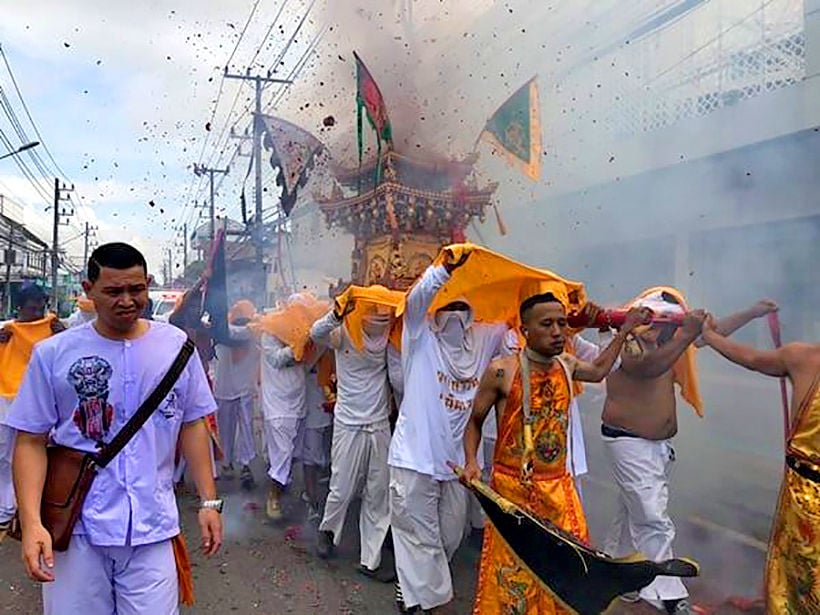 OPINION: Phuket’s Vegetarian Festival is now for the tourists, not the locals

Burmese students in Thailand are holding an art and culture concert to raise awareness and funds for the Civil Disobedience Movement. The concert, called “Myanmar Spring,” will be held on April 24 at the Bangkok Art and Culture Centre. The event will help fund the movement, which has staged protests over the February 1 coup in Myanmar by the military. It will honour the families of internally displaced individuals and of those who have lost their lives in the conflicts.

Last Friday, the Myanmar military allegedly killed 82 civilians, according to the Assistance Association for Political Prisoners, an advocacy group. The military then told the families of those killed that they would have to pay US$85 to recover their loved ones’ bodies, according to Bago University Students’ Union’s Facebook page as well as Radio Free Asia’s Burmese service.

Eyewitnesses in Bago say the Burmese military used grenades, RPGs, and assault rifles to quell anti-coup protestors, forcing many villagers and activists to flee and go into hiding. Military security forces are going through the neighbourhoods now and have cut off internet access. Since the February 1 coup, the military has been systematically cracking down against peaceful protesters, detaining 3,000 civilians and killing over 700 more.

NGO Human Rights Watch had published a call for the EU to take action and implement strict sanctions on the Burmese military on Thursday. And yesterday the US Embassy in Myanmar joined the call, posting on Twitter, urging peace.

The art and cultural event will also be held virtually on the same day. Anyone wishing to support the event outside of attending can buy t-shirts at the food festival being held on April 13. The orchestral music concert will be performed by a group of student volunteers and others. There will also be a poetry recital and other heartfelt performances, which the artists say will reflect the struggles for democracy in Myanmar.

Information on tickets and performances for “Myanmar Spring” is on their Facebook page HERE. 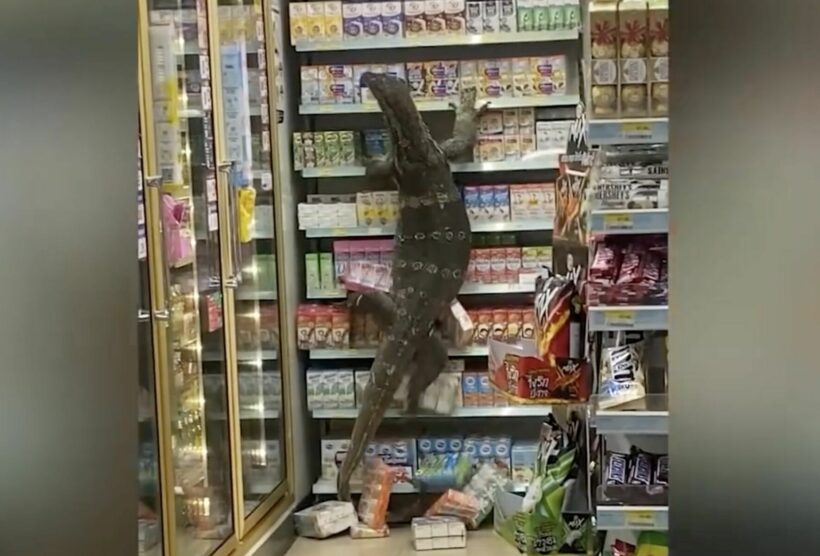 A giant, nearly 2 metre long, monitor lizard decided to visit a 7 Eleven store looking for food, with customers and staff wondering what he (or she) was going to do next. The lizard climbed up a fully stacked shelf of dairy products, with apparently no cares in the world, as he clumsily knocked off cartons of milk and other packages. At the top, he appeared to stop for a rest. After all, that was a big climb for a 2 metre monitor lizard.

Witnesses say he came from a nearby canal on the outskirts of Bangkok, in which it’s speculated he probably struggled to find food outside due to months of dry weather that has led to lakes and canals drying up. Police were called and with them, they brought reptile handlers to catch the lizard and escort him outside. The video of the incident has gone viral worldwide, and can be watched HERE.

Noting from Culture Trip, monitor lizards will generally run away from people. They do not prey on humans but will defend themselves if threatened. They can make an intimidating hissing noise and often lash with their tail to protect themselves. Their claws and teeth can also inflict nasty injuries, which are prone to infection.”

If you see a monitor lizard in the dairy section of your nearest 7 Eleven, best give it some space and leave the beasty’s removal for some experienced hands.

A band member from Bangkok who attended three ‘Kolour’ party events in Phuket over the weekend has tested positive for Covid-19. The main Kolour Beachside Main Event was held at Cafe Del Mar, along Kamala’s foreshore. Other pre and post event parties were also held at Shelter and Illuzion, both in Bangla Road, Phuket.

The promoters sent out this letter today…

We have received enquiries from our guests ever since the news announced about a new wave that occurred in the Bangkok nightlife area.

We have been notified directly from one attendee that they tested positive for Covid 19 on April6th. The guest visited all 3 Kolour events in the past weekend. The guest also informed us that they attended one of the Bangkok clubs that has reports of a cluster before they arrived at our events and suspect this is the origin.

In light of this, we suggest all guests monitor their condition and, if in doubt, always put safety first by considering self-quarantine.

We are working with the appropriate authorities and will provide updates on a regular basis.

Please be aware of false rumours circulating around this situation and that we will only share verified information from sources on our channels.

If you have any concerns or if you have any information that might be important around this, please email us directly at safety@wearekolour.com

Laguna Phuket have postponed the Revive 555 Festival events following today’s revelations. It appears that the band member contracted the coronavirus as part of the current cluster of infections recorded around Bangkok’s nightlife in the past few days. Some photos shared with The Thaiger of the Cafe Del Mar event show very little mask wearing at the Kolour Beachside Party. 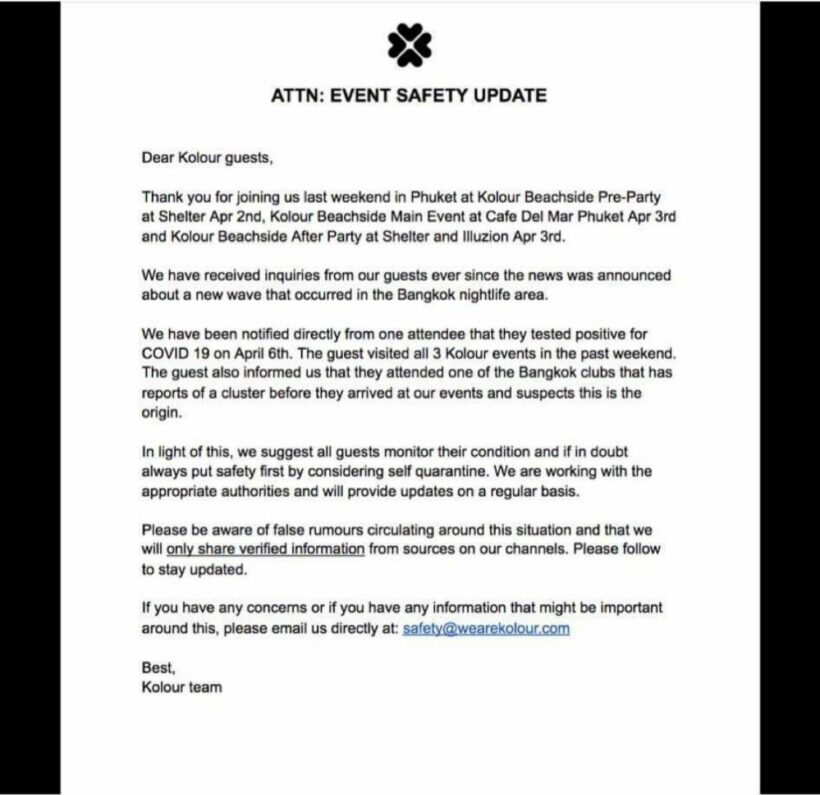 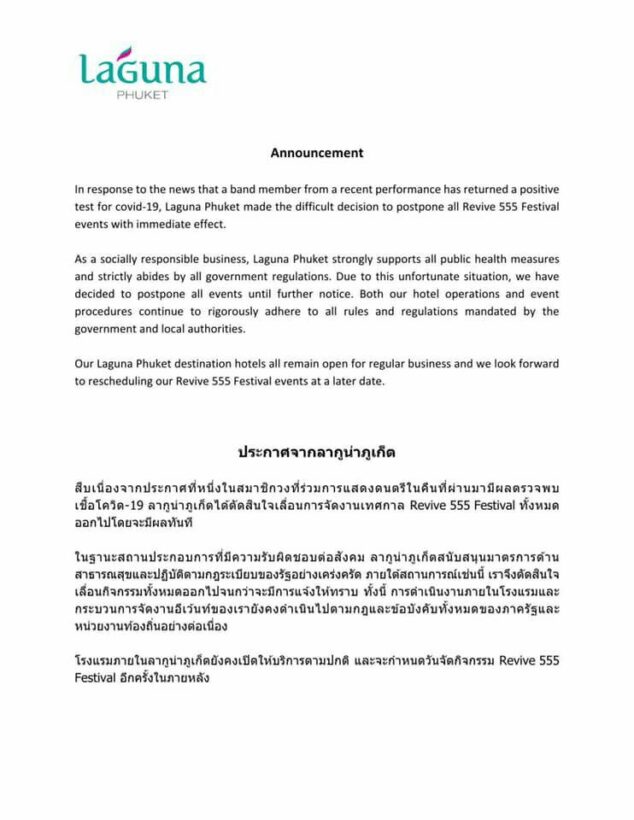 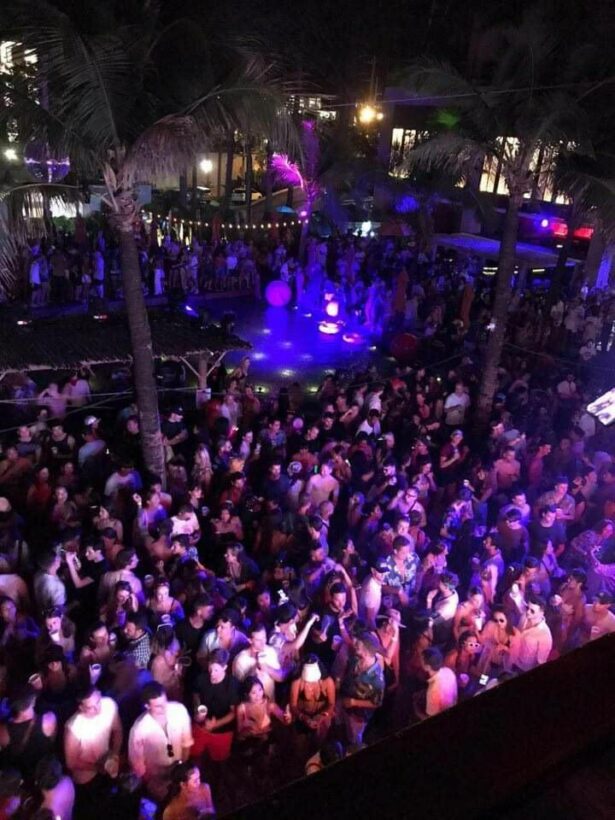