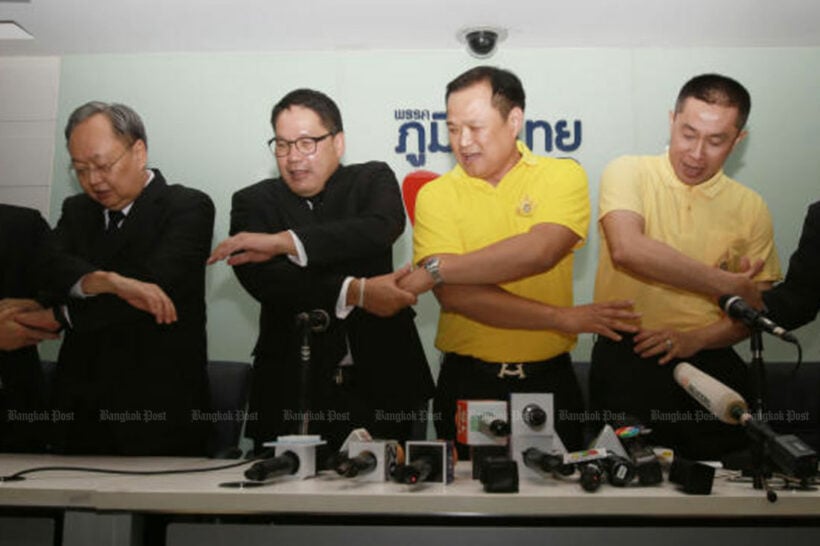 Close, but not quite.

Palang Pracharath Party paid a visit to Democrat party leaders yesterday with presents of cabinet portfolios that they are offering the Democrat and Bhumjaithai parties if they were to join the pro-Army coalition.

Sources say the Palang Pracharath Party has promised both swing parties many cabinet portfolios they are keen on in a bid to secure their votes. Without both the Democrats and Bhumjaithai support a Palang Pracharath coalition would be unable to govern in the lower house with a numerical majority.

According to the Bangkok Post, the Democrats have reportedly secured the Agriculture Ministry, Commerce Ministry, and Social Development and Human Security Ministry.Meanwhile, Bhumjaithai is expected to take the helm at the Public Health Ministry, Sports and Tourism Ministry, and Transport Ministry.

Both parties have been offered four cabinet seats in return for their support to form a pro-Army coalition. Party representatives say the coalition talks are ongoing, “looked promising” but insist nothing had been finalised.

Bhumjaithai leader Anutin announced yesterday that his party had accepted the PPRP’s invitation to join, and that the PPRP had been informed of the four conditions they would need to meet, including that the coalition must not be a minority government and the party’s policies must be adopted.

Phones will be running hot today in the lead up to parliament’s vote for a Prime Minister.