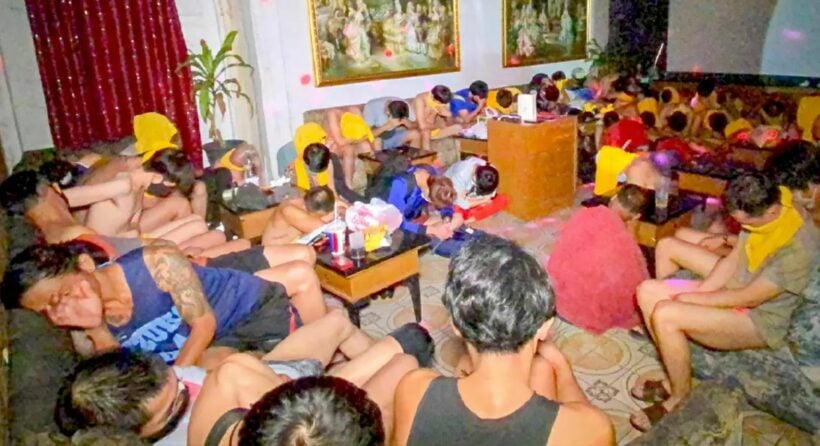 A Bangkok area sauna shop was raided after reports of a drug and sex-fueled party and 57 men were arrested inside. The shop is located in the Wang Thonglang district of Bangkok, and local residents complained last night of large groups gathering at the establishment. Police arrested the 57 men for a variety of charges including drug crimes and violation of the Emergency Decree implemented to curb the spread of Covid-19.

In Bangkok, all social gatherings are banned according to the announcement by Bangkok Metropolitan Administration in accordance with the Emergency Decree and the Communicable Disease Control Act. Socializing with people aside from members of your own household is forbidden, along with gatherings of more than 2 people that involve alcohol consumption.

During the raid of the Bangkok sauna, the 57 men were found with a plastic bag of crystal methamphetamine, a meth pill, a sexual arousal inhalant, 2 syringes and a lot of used condoms. After finding all the drugs and paraphernalia, police drug tested all the men who were in the shop. 14 of them reportedly admitted to partaking in the crystal meth, though urine testing showed that 30 men had the drug in their system.

No word on exact charges for those at the wild party last night at the Bangkok sauna, but all involved face charges of violating the Communicable Disease Control Act and the Emergency Decree, punishable by up to 40,000 baht fine and up to 2 years in prison. They also may face drug charges.