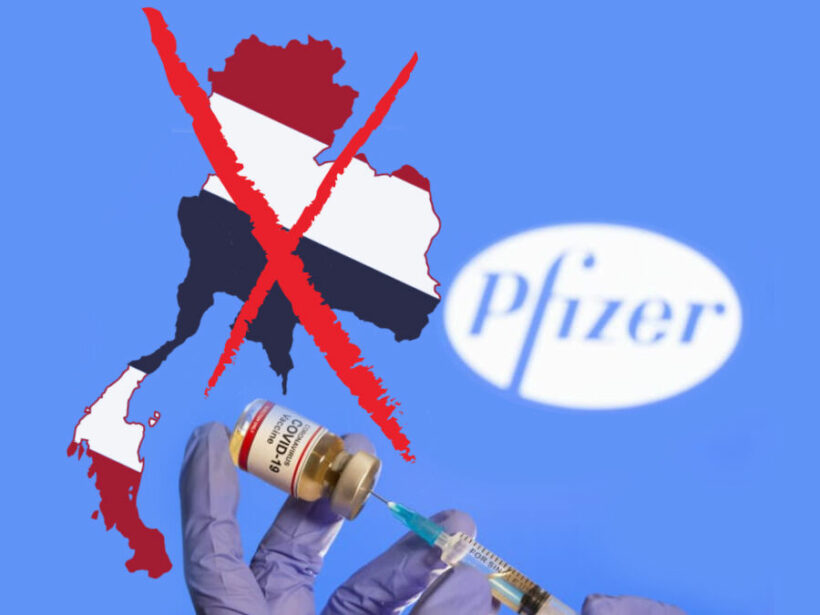 PHOTO: Thailand removed from the list of Pfizer vaccine recipients. (via Wikimedia)

The New York Times removed Thailand from their infographic of countries that have imported the Pfizer vaccine after initial reports could not be confirmed. Pfizer denied that Thailand had made a deal to acquire jabs of the Pfizer-BioNTech vaccine. The early rumours of the deal sparked controversy in Thailand, as they were listed as having the jab available only for limited emergency use.

Online, Thai people were furious, questioning why they don’t have any access to vaccines if Thailand was already stocking them. Former PM Thaksin Shinawatra railed against the government for their vaccine failure in an online Clubhouse forum. With Thai people up in arms, the report turned out to be false anyway.

The Associated Press had reported on April 1 that Thailand had approved 7 different vaccine brands, including Pfizer, after passing evaluations from Thailand’s Food and Drug Administration or the World Health Organisation. It was part of a story about Thailand shortening quarantine periods for people who had already been fully vaccinated by one of these 7 vaccines. A careful reading of the article though, suggests that these 7 approved vaccines are for people who were entering Thailand but had been vaccinated in other countries.

Thailand though has not approved or imported the Pfizer vaccine yet, much to the chagrin of millions waiting on the snail-paced rollout of widespread vaccination in the country as they currently experience a third wave of Covid-19. The Chinese manufactured Sinovac vaccine is the main dose used in Thailand now, with AstraZeneca being imported now and beginning to be produced locally by Siam Bioscience for use after June.

Johnson & Johnson has also been approved. Moderna is currently going through the approval process and other manufacturers such as Russia’s Sputnik V, China’s Sinopharm, and India’s Bharat Biotech are said to be working on the beginning paperwork towards approval.

The Secretary-General of the Food and Drug Administration confirmed that Thailand has not acquired the Pfizer vaccine and none have been imported yet, justifying the removal from the New York Times infographic map.