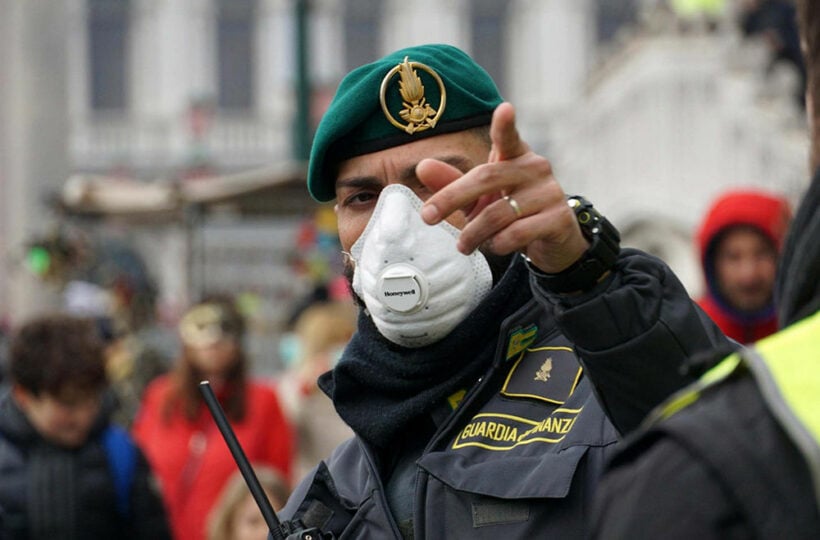 PHOTO: Italian police monitoring the close down of Venice Carnival festivities - The Independent

Coronavirus (Covid-19) cases have now reached 79,561 around the world, with 77,345 of the cases confined to China. The rise in cases has been principally in China with 409 new cases and South Korea with 161 new cases. 2,619 people have died from the infection.

The major outbreaks, outside China, have been in South Korea, aboard the Diamond Princess (still moored in Yokohama Bay, Japan) and now also in Italy. 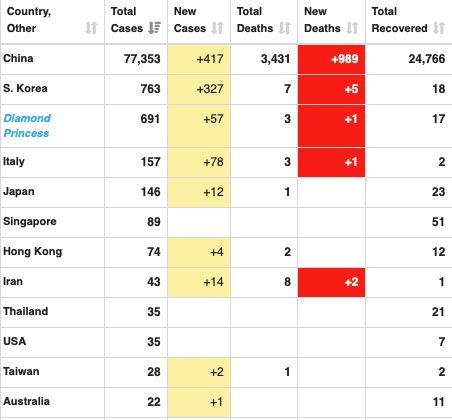 Italian officials cancelled the annual Venice Carnival, cutting short the event by two days. The situation in Italy is the worst outbreak of the coronavirus in Europe. There are now a57 confirmed cases in Italy with 78 confirmed in the past 24 hours.

Three people have died in Italy. Now Italian officials have imposed strict quarantine restrictions in two northern “hotspot” regions close to Milan and Venice. The cities of Veneto (5 million) and Lombardy (10 million) have virtually quarantined about 55,000 people in sections of the cities for the next two weeks. They will be confined to their homes and prevented from travelling.

Even outside the zone, many businesses and schools have suspended activities, and sporting events have been cancelled.

Thai AirAsia X, the international brand of Air Asia, announced the cancellation of some flights operating to and from South Korea from March 6-27. Passengers are being offered a range of options.

• Passengers can postpone the travel date on the same route for one time within 30 days from the original schedule without additional costs. However, it will depend on seat availability on the flight and the conditions specified.

• Passengers can keep their points in the AirAsia BIG point reward account for travel in future, which must be booked within 90 calendar days from the original schedule. However, passengers can schedule the new travel date after the expiry date if the flight schedule is still available.

• Passengers can request a full refund for all flights to and from South Korea. The airline will inform concerned passengers about the cancellation via email or SMS. Meanwhile, passengers can request offers via Ava Live Chat at support.airasia.com. In case of booking through a dealer or online travel agent, passengers must proceed with the agent that they had booked with. However, the airline will monitor the situation closely and update information periodically.

Thai education minister Nataphol Teepsuwan says that the ministry has asked teachers and students who had travelled to six countries, including China, Japan, Hong Kong, South Korea, Taiwan and Singapore, to voluntarily remain confined to their homes for 14 days.

“The measure is in line with the Public Health Ministry’s guidelines to prevent the spread of coronavirus. Parents of students who travelled to those six countries should also stay at home in order to make sure that they were not infected by the coronavirus.”

The number of virus cases in Thailand remains at 35. Epidemiologists earlier believed that the virus could be transmitted to other people even though those infected may not have fallen ill yet. Recently scientists studying virus cases in China said that the virus incubation period may be longer than 14 days, and perhaps up to 20 days.

South Korean health officials say they’ve decided to raise the alert level over the COVID-19 virus to “highest” in response to the confirmation of hundreds of additional cases over the weekend.

President Moon Jae-in says that the next few days are critical in official efforts to contain the virus.

“The COVID-19 incident has been confronted by a grave watershed. A few days from now is a very important moment.”

It’s the first time that the country, traditionally known for tight quarantine measures, has raised the virus alert level to “serious,” the highest in the four-tier system, in 11 years since its previous step against Influenza A (H1N1).

The president said the government and the local authorities should not hesitate to take “unprecedented powerful” measures to contain the viral disease without being limited by “regulations.”

The President mentioned a minor Christian sect, known as Shincheonji. Its church in Daegu, 300 kilometres southeast of Seoul, is viewed as an epicenter of many infections reported over the past few days. The 31st reported patient infected with the virus, a woman in her 60s, is presumed to have attended lengthy crowded worship services at the church in Daegu before testing positive for the virus last week.

The number of confirmed cases in South Korea, mostly in Daegu and the nearby town of Cheongdo, have since shot up to over 556 as of Sunday morning. Moon pointed out that health authorities are taking “special” steps in connection with the followers of Shincheonji, meaning “new world” in Korean.