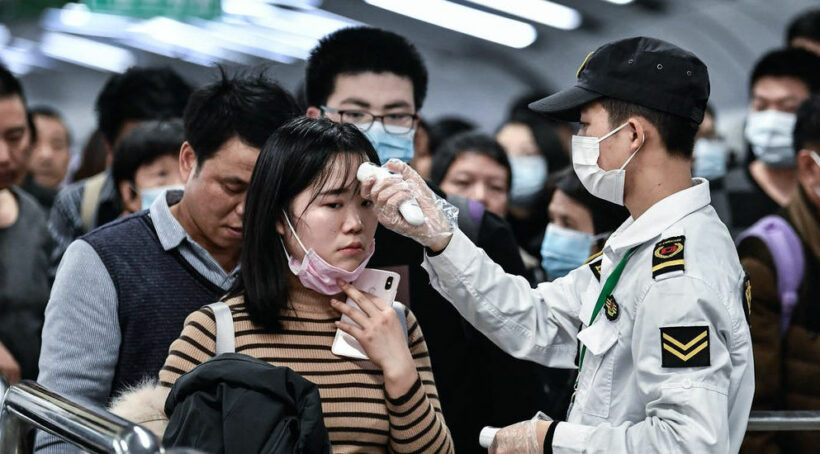 The death toll from the novel coronavirus has grown to 80 today. The entire Hubei Province is now in the largest health ‘lockdown’ ever mounted in modern medical history with tight controls of who or what is inbound or outbound from the central Chinese province, plus severe restrictions on movement in place in several other Chinese cities.

The number of deaths from the flu-like virus in Hubei province climbed from 56 to 76 overnight with four deaths elsewhere in China. The total number of confirmed cases in China had risen to 2,744, but that number is sure to rise in the next days and weeks.

In Thailand, the Public Health Minister Anutin Charnvirakul has come out to assure the Thai public that current preventive measures are sufficient to control the spread of the novel coronavirus within the Kingdom. He says the Ministry is coordinating with the World Health Organisation to keep up-to-date with the evolution of the virus in China, as well as the limited cases in Thailand involving Chinese visitors.

In a livestreamed video at midnight last night, the minister said that Thailand “had been through similar crises before and is making use of the experience”, with updated technology and tracking to suit the current situation.

Anutin announced that there have been eight confirmed cases in Thailand, all of them tourists who had flown in from Wuhan, the Chinese city at the epicentre of the current outbreak.

“Five of these have already returned home with the remaining three clear of the virus with their condition steadily improving.”

“I can assure you that, for the time being, the situation is under control.”

The Minister confirmed that 84 Chinese tourists remain under observation in Thailand, including 24 who were detected with a “fever” at airport screening on their arrival. 60 other voluntarily admitted themselves to hospital after developing symptoms associated with the coronavirus.

“45 of them, however, have been discharged and have returned to China, leaving 39 still under observation.”

Meanwhile, Dr. Suwanchai Wattanayingcharoenchai, claims that person-to-person transmission of the novel coronavirus is “not easy”. He made his comments after following the recovery of 40 patients, including medical personnel who had been working in close contact with infected patients without becoming infected themselves.

Apart from screenings at all international airports, Chinese nationals entering Thailand over the Cambodian border point in Aranyaprathet district are also being given thermal health scans for signs of the coronavirus. About 500 Chinese in tour groups passed through the checkpoint this morning. They were all screened and none were detected with any symptoms. All were allowed to enter Thailand, according to the Bangkok Post.

The side-effects of the global concerns include international markets. The US S&P500 futures fell more than 1% in Asian trade this morning on mounting worries the outbreak of the virus could severely disrupt the Chinese economy.

China’s cabinet says it is extending the week-long Chinese New Year holiday to ten days, to February 2 in a bid to slow the spread of the virus. And Beijing is calling for full transparency in managing the crisis, after losing public trust following a cover-up of the spread of SARS, a similar coronavirus that originated in China and killed nearly 800 people globally in 2002 and 2003.

The World Health Organisation has stopped short of designating the outbreak a “global health emergency”, but some international health experts question if China can contain the epidemic.

WHO Director-General Tedros Adhanom Ghebreyesus arrived in Beijing over the weekend to meet government officials and health experts dealing with the outbreak.

Meanwhile, France, Italy, Japan, Thailand and the US have all announced evacuation plans to repatriate their citizens from Wuhan. France said it expected to repatriate up to a few hundred of its 800 citizens living in the Wuhan area. The French government says the evacuees will spend 14 days in quarantine to avoid the spread of the virus when they return. In Thailand the government has also announced plans to use civilian and Air Force planes to bring Thai citizens, including students and massage spa workers, home.