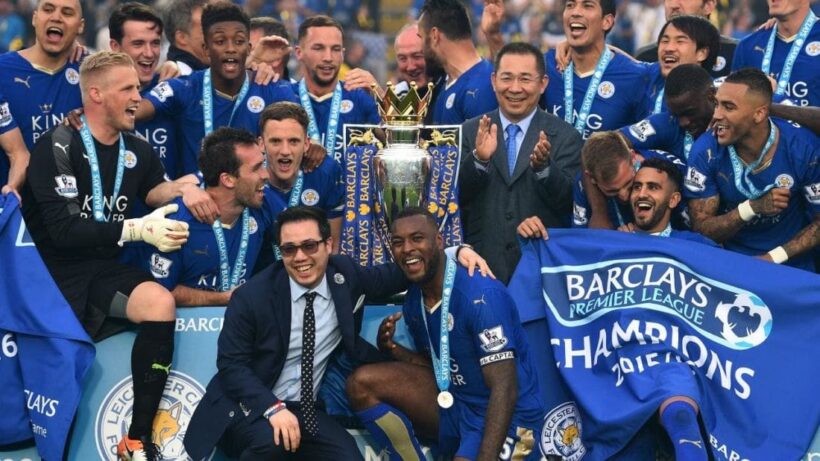 Fans have been laying out flowers, football scarves, prayers and tributes outside the Leicester City club grounds after Saturday’s helicopter accident, in tribute to Vichai Srivaddhanaprabha, the Thai Leicester club owner fans credit for an against-all-odds Premiership victory in 2016.

“Leicester City was a family under his leadership. It is as a family that we will grieve his passing and maintain the pursuit of a vision for the club that is now his legacy.” – Leicester Club statement.

The club’s Thai billionaire owner died in a helicopter crash just outside the ground. According to witnesses it had just taken off from the centre of the pitch and was just gaining altitude when it appeared to suffer an unknown mechanical failure.

Fans streamed towards the stadium to express their gratitude and condolences, sensing the worst, but before official confirmation that the 60 year old businessman, had perished in the crash. Vichai frequently flew to and from Leicester’s home games by his family-owned helicopter. Four other people on the helicopter, including two members of Vichai’s staff, were also killed in the crash.

As emergency vehicles whizzed back and forth from the crash site, the car park in the rear of the stadium, a stream of people came to pay homage and their gratitude.

According to AFP, one 55 year old fan said, “He’s put Leicester on the map. He’s made us big, we’re not just a little club anymore.”

Vichai also had enormous impact on Thailand football, not only in the international arena, but developing Thai football and sponsoring many competitions and clubs.

Eyewitnesses report that the helicopter appeared to develop some mechanical problems in the rear rotor shortly after takeoff. Orange balls of flame engulfed the craft as it crashed to the ground, according to people that watched the horror unfold.

It was under Vichai’s ownership of the club that Leicester was able to produce one of the biggest fairytale wins in English football history by winning the 2015/16 Premier League title. The club had started the season as 5,000-1 outsiders to win the title.

Black box recovered as probe begins into cause of Vichai crash

Unofficial confirmations that Vichai Srivaddhanaprabha was aboard crashed helicopter