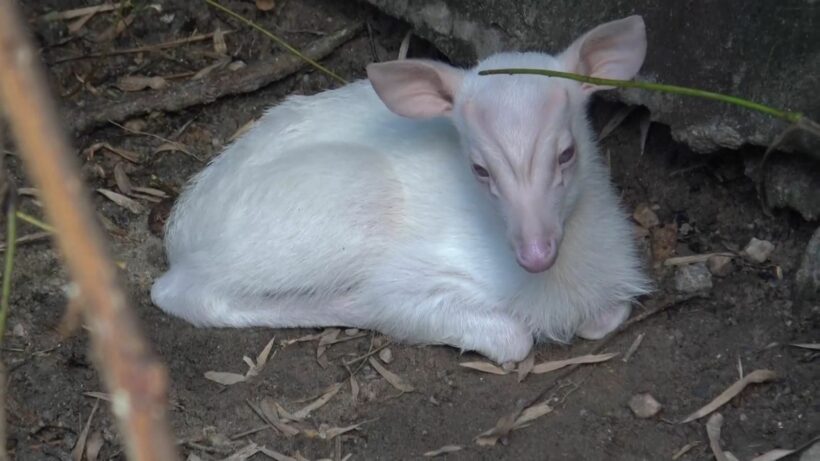 After a rare albino barking deer went missing from the Songkhla Zoo, the zoo director, who claims the animal was eaten by a python, is now being investigated by the Zoological Park Organisation as well as the Natural Resources and Environment Ministry. The 1 year old deer went missing from the zoo in February, but yesterday zoo director Chalermwut Kasetsomboon said he now has photos that show the deer was eaten by a snake and had them confirmed by a vet.

Board president of the organisation Chawalit Chukhajorn suspects the director’s claims that the deer was swallowed by a snake could be a cover up.

“The discrepancy in the zoo’s and director’s reports could mean that the barking deer was stolen and someone wanted to cover up the evidence.”

The missing deer’s pedigree traces back to a deer that was given to Her Majesty Queen Sirikit The Queen Mother as a gift by a villager and then she gave it to the Dusit Zoo. Chawalit says “this is a serious issue, as the albino barking deer is a rare animal that Her Majesty the Queen Mother had given” to zoos to breed. The deer’s offspring were given to other zoos, like Songkhla Zoo.

Chawalit says he’s set up an investigation committee, chaired by the vice president of the Zoological Park Organisation, and says “I will personally fly to Songkhla on Friday to investigate the scene.” He says he will look into transfeerring the director out of the Songkhla zoo during the investigation.

The National Resources and Environment Minister Varawut Silpa-archa has also ordered an investigation into the missing deer and has also tightening security measures at zoos under the ministry to make sure other rare animals don’t go missing.

“We don’t know whether it is still alive or dead. But we will know a week after the investigation is completed. If any wrongdoing is found, the zoo director must take full responsibility.”