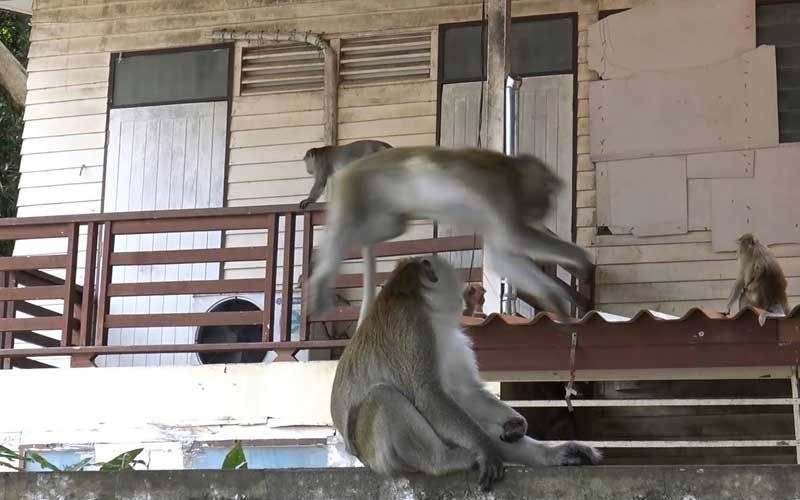 Monkeys took over a Songkhla home in Southern Thailand while a family was away during the 4 day long weekend holiday. Monkeys were on the roof, in the trees and on the fence while trash was scattered across the yard and driveway. Luckily, the monkeys couldn’t get inside the home (although we bet they tried).

Monkeys frequent the area near the Tang Kuan Hill and are often fed by locals and tourists visiting the nearby Laem Sai Temple. Knowing hungry monkeys are in the area, the family took precautions before leaving their home unattended. They locked all the doors and shut the windows. They also tied up the trash bags and covered the bin before going off to visit their relatives in another province.

The monkeys weren’t able to enter the house, but they were able to open the rubbish bin and eat what was left of any food scraps. Thai media did not report on how the family was able to get rid of the monkeys, but it probably wasn’t easy.

This isn’t the first time monkeys have taken over. Back in March, 2 groups of monkeys had an all-out brawl in Lop Buri. The city is known for its large monkey population, but the 2 groups of monkeys – the street monkeys and the temple monkeys – usually don’t mix. Some suspect the brawl was over lack of food. Others say it could’ve been the heat that drove them mad.

Lack of food has led many monkeys to go to areas they don’t usually go to. With few tourists, due to the coronavirus pandemic, monkeys that relied on the visitors to feed them are now going hungry.

Songkhla started having a problem feeding the monkeys early on in the pandemic. Back in February, the province started cancelling tours and the monkeys started to go hungry. Local fruit vendors helped out by giving the animals watermelon and tomatoes.

Ships want a shortcut: Studies to start on Thai canal and land bridge