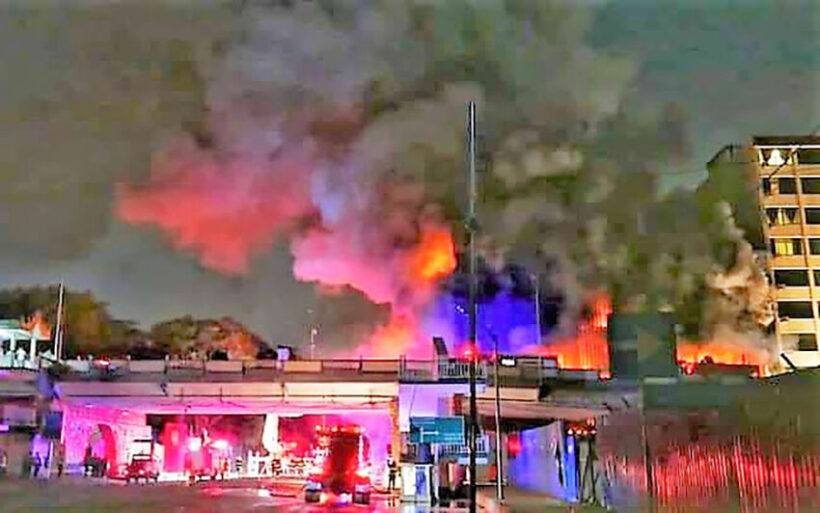 2 Yangon department stores with links to the Burmese military have been burnt down overnight, with some saying it was an inside job. The Ruby Mart, in Kyauktadar Township, and The Gandamar Wholesale Center in Mayangone Township, are both affiliated with the military junta, and some suspect the fires were started with the intention of blaming pro-democracy protesters.

Thai PBS World reports witnesses saying both fires started between 2am and 3am on April 1. There has been no statement from the Burmese military in relation to the fires, but many expect fingers to be pointed at anti-coup activists. According to local media reports, residents living near the Ruby Mart arrived to help put the fire out, but security forces prevented them from reaching the building. It’s understood a civilian was shot and killed and there have been reports that the victim’s son and daughter have been arrested.

There have been widespread calls to boycott military-owned or affiliated businesses, since the Burmese army launched a coup on February 1 that ousted Aung San Suu Kyi’s democratically-elected civilian government. Both the Ruby Mart and Gandamar Wholesale were listed as businesses to boycott, with Ruby Mart subsequently employing more security staff and closing its doors. Gandamar Wholesale followed suit, closing the gates of the compound in which it’s located and employing more security personnel.

One witness who lives in the vicinity of the Ruby Mart described what he saw during the fire, and believes it was an inside job.

“I was woken up by loud bangs. I rushed to get up to check and saw that the sky was grey and orange, with the flames lighting up the clouds of smoke. I went down to help, but when I got down, my neighbours, who were already on the street, told me that it was unsafe because soldiers are shooting at anyone they see. So, I went back up and kept watching from my balcony. It is impossible for citizens to have started the fire. Since day 1, they put more security there and it remained closed most of the time. For that size of blaze, it had to have started inside the building, with plenty of fuel for the fire. I think tonight’s news will mention that the people are causing riots and committing arson.”